(Editors note: This beautiful B-24 placed third in it’s category at the recent IPMS Seattle Spring Show. It’s an awesome piece of work by a talented modeler and I’m jazzed to have it on MPS. Note the original pictures of Lil’ Deicer were used with permission from the American Air Museum, Duxford)

I’ve wanted to build a B-24 for a long time: hoarding several of the Hasegawa kits (#00932) for the day I felt up to the challenge. That day recently came and I selected the B-24D “Lil’ De-Icer” as my subject. The -24 never had the looks or publicity of the B-17 but they still turned in the work and often paid the price along with their crews. 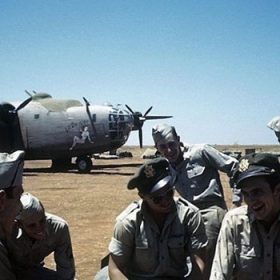 This particular aircraft participated in the bloody Operation Tidal Wave against the Ploesti oil fields on August 1st 1943. Serving with the 98th BG, she returned from this raid with her entire crew[1]. According to what I’ve been able to find the aircraft served well into 1944 and was finally sent back to the states in favor of newer and less battle worn aircraft,[2]. She met her end on the scrap heap in 1946.

This history combined with an excellent and well researched decal sheet from Lifelike Decals (#72-029) made the decision easy: a desert-pink B-24 it would be. The nose art didn’t hurt either.

Inaccuracies of the Kit:

There were two major inaccuracies that needed correction right out of the box. The most obvious is the configuration of the starboard side front window. The kit molds this as a separate window, while photo references clearly show a smooth panel on Lil’ De-Icer and other aircraft of the same production run. This was fairly simple to rectify, as it only required a light bit of filling to level out the detail then a quick re-scribing using thick tape as a guide. I used mostly 400, 600, and 1,000 grit Alpha abrasive sheets for this job as these cause less scratching damage to the plastic. 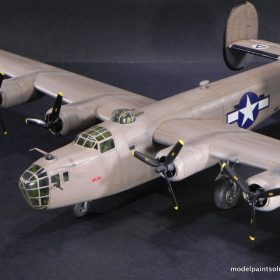 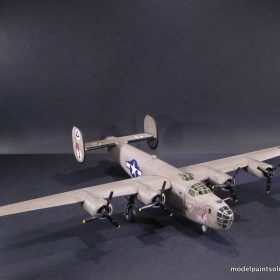 The second error was much easier to correct, but was rather puzzling given the quality of the rest of the kit. On the B-24D model, the front landing gear doors retracted into the wheel well, and are not visible when the plane is on the ground. Hasegawa would have you use the doors from a later version if you follow their instructions. This is an extremely easy fix, as I simply left the doors off. 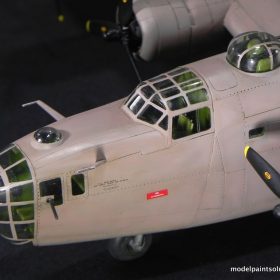 Finally the positioning of the nose guns took a bit of research and comparisons to other aircraft in the squadron where photos were available. From what I could gather the single machine gun in the very front of the nose was omitted on Lil’ De-Icer, either to save weight or to clear the line of sight for the bombardier.

WEIGHT – AND LOTS OF IT!

The kit calls for 90 grams of weight in the nose in the instructions, and I initially assumed this was an error. Not so, as I wound up using even more than that from my trusty roll of lead. Due to the open nature of the nose, the front wheel bay and the fuselage underneath the top turret were crammed full of lead in an effort to bring about the correct stance. Fortunately the kit landing gear is extremely robust and was up to the task of supporting this beast! 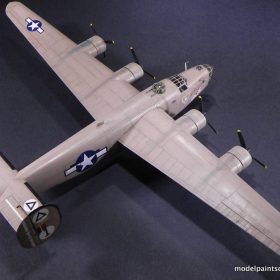 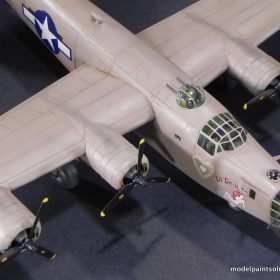 With the aid of a set of masks from Eduard and my trusty supply of Mr. Paint (MRP) USAAF colors, the actual painting of this beast was rather straightforward. All of the demarcations between the Neutral Grey (MRP 141) underside and Desert Sand (MRP 144) top color were done free hand. This was made easy by the large and quite soft edges on the real aircraft and the characteristics of the lacquer paint that allowed for extremely tight work to be done without going crazy in the process. 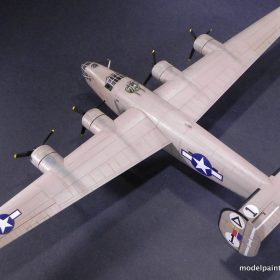 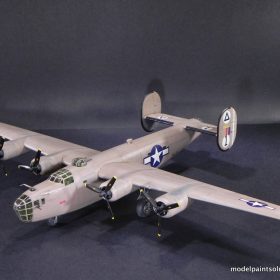 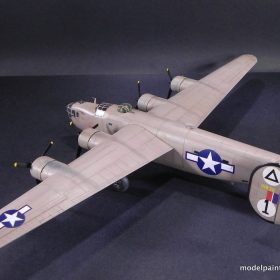 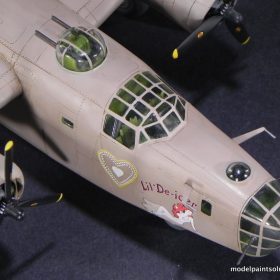 I elected to forego pre-shading opting to focus instead on applying a bit more of the desired color in the center of some panels to try and create some variation. The effect wound up being a more subtle than I would have liked, but I definitely intend to move more in this direction with my work in the future, as it is both more controllable and more fun than the old school blackened panel lines method.

DECALS, WEATHERING, AND THE LOGIC BEHIND THE EXHAUST STAINS

Decals were laid down with a substantial amount of cursing and gnashing of teeth due to the fragile nature of the Microscale printed sheet. My most grievous error came from the use of Tamiya’s Matte Clear XF-86 thinned with their acrylic X-20A thinner. This mixture attacked my decals and caused significant damage to some of the more complex surfaces. Thankfully my experience in painting war-gaming minis with a hairy stick came to the rescue and I was able to freehand the corrections and touch ups with Vallejo acrylics. After this, I sprayed a coat of Dullcote to seal everything in and prep for the various washes. 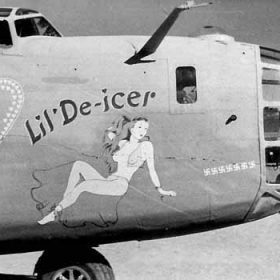 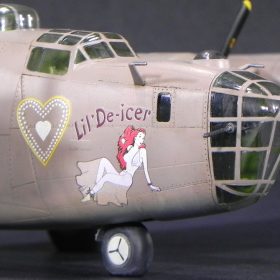 Weathering was a straightforward affair thanks to a mix of Mig and AK Interactive enamel washes. I used AK’s Africa Dust Effects (AK 022) to bring some of the hard living that the Libyan desert posting of the real aircraft inflicted to the model, focusing on the underside. This was more of an armor technique of applying, allowing it to dry, and then lightening the effect with a careful use of odorless thinners and a soft brush. I also found both the small and large microfiber swabs allowed great control when blending in and around panels. I attempted to keep the effect light so as to not spoil the scale effect by overdoing things. 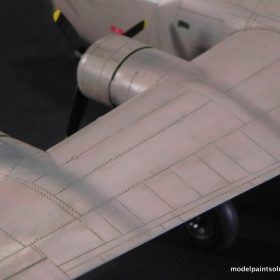 The exhaust stains sparked a bit of controversy at my local IPMS club. While the actual exhaust on the B-24 routes through the supercharger and out the bottom of the engine nacelle, I noticed in my photo references that a number of the North African based 24’s exhibited significant stains across the top due to cracked exhaust rings. I wasn’t able to find any suitable photos of Lil’ De-Icer, but elected to use weathering in this area to help tell the story of a battle weary bird. 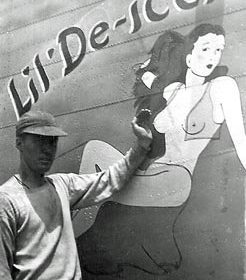 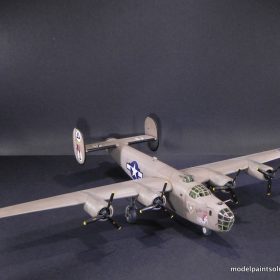 Overall I’m quite pleased with the result, and I feel like it makes a fine addition to my collection. My main takeaway would be that whenever possible, research your topic and try and gather as many photos as possible. It’s the small details and corrections that often bring a model together and make it appealing, and I hope I achieved at least a bit of that here. 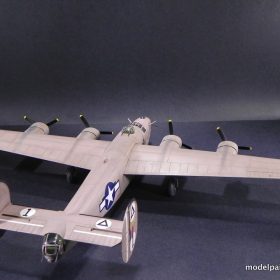 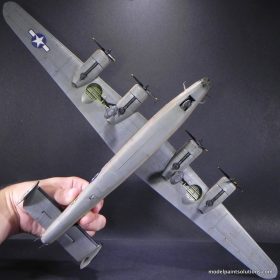