Model and Text by Evan Smith

Always pushing the envelope for cleaner, shinier, and more realistic finishes, Evan Smith is back with his gorgeous Ferrari 250 GTO. I like this model. My feeble photography skills don’t do justice to the depth of the finish: awesome. The 250 GTO is a pleasingly svelte automobile to begin with. Add the finish Evan put on this 1/24 version and it’s a stunner. 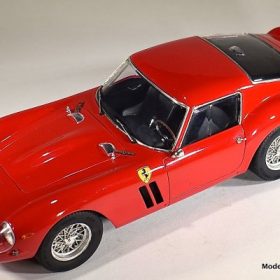 The Ferrari 250 GTO is a GT car produced by Ferrari from 1962 to 1964 for homologation into the FIA’s Group 3 Grand Touring Car category. It was powered by Ferrari’s Tipo 168/62 Colombo V12 engine.

The “250” in its name denotes the displacement in cubic centimeters of each of its cylinders; “GTO” stands for “Gran Turismo Omologata”, Italian for “Grand Touring Homologated.” 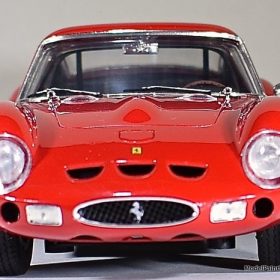 When new, the GTO cost $18,000 in the United States, with buyers personally approved by Enzo Ferrari and his dealer for North America, Luigi Chinetti. In October 2013, Connecticut-based collector Paul Pappalardo sold chassis number 5111GT to an unnamed buyer for a new record of around $52 million. In June 2018 the 1964 250 GTO set an all-time record selling price of $70 million. 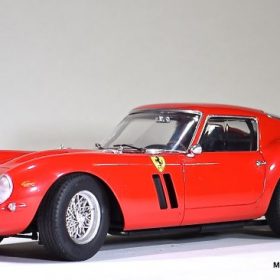 This kit was a bit of a mixed bag. The exterior and passenger compartments are both excellent; fitting together nicely with no struggles or drama. The body itself is an excellent representation of the car in one of its many variants. Worth noting is that being a race car, these bodies were often crashed and rebuilt by Ferrari. One result of this was that no two were exactly alike as engineers improved and modified the design over time. 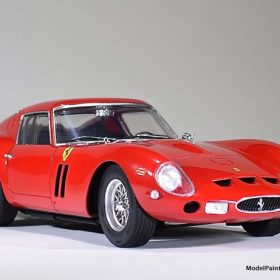 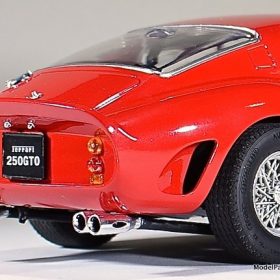 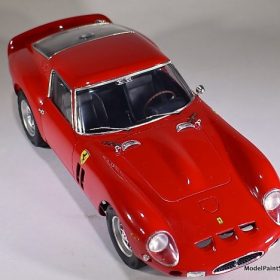 The kit was built out of the box, with no aftermarket parts added. The tricky part of the build was the suspension and running gear. Either through some small gap or piece not fully seating, the hood would not close with the carburetor downdraft tubes installed. I decided to glue the hood shut to preserve the lines of the car. 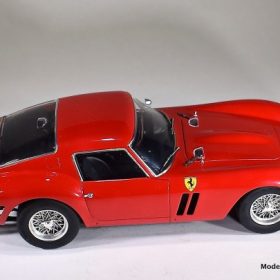 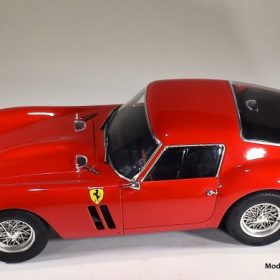 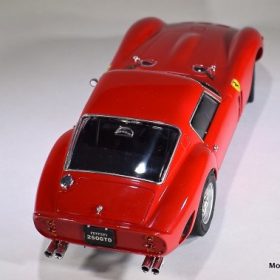 More concerning was the kit’s method of attaching the wheels, which required them to be jammed onto poly caps fitted within the wheel hubs. As the mounting points were actually too small for the poly caps to fit, I quickly abandoned this and cut out the caps and mounting stems in favor of gluing the wheel directly to the brake hub. Not an ideal method, but it worked in the end. The fragile and at points poorly engineered method of putting the front suspension in place also caused issues. 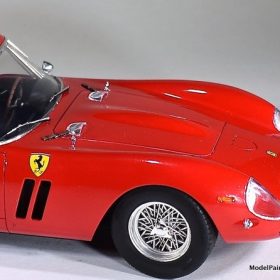 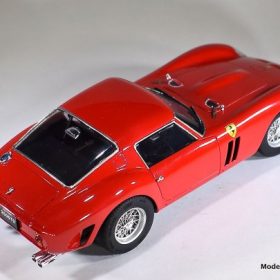 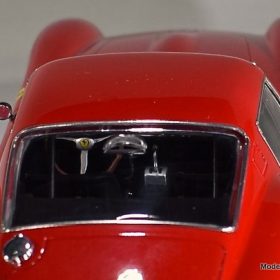 The model was sprayed with Stynylrez White acrylic primer which was sanded when dry. This was shot at 30-35 psi straight from the bottle through my Harder&Steenbeck Evolution AL+ with a .4 needle/nozzle. Rosso Corsa by Gravity was  used for the base coat. This was sprayed straight from the bottle, at ~15 psi with a total of ~4 layers of Red laid down. 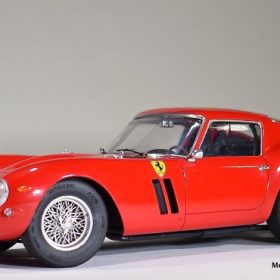 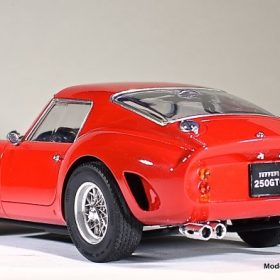 I also chose to spray the door mirror in chrome in order to get more of a 60’s American road car vibe, starting out with Gunze GX2 onto bare plastic. This was thinned 50/50 with Mr. Leveling Thinner, with a final mist coat of thinner only to help it settle into a smooth surface all at around 15 psi. After that I sprayed it with AK Extreme Metal Chrome straight from the bottle and sealed it with Alclad Aqua Gloss as oils in skin will cause the paint to come off. 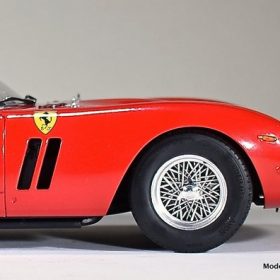 The interior was painted in various shades of MRP Black and Grey to give a bit of variety to an otherwise spartan interior, but little of that is visible through the glass. I also sprayed the fire extinguisher in chrome using the same method as the mirror. 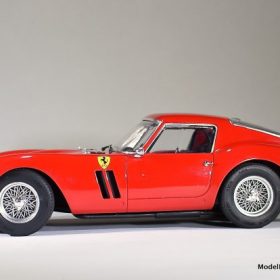 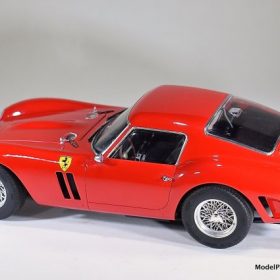 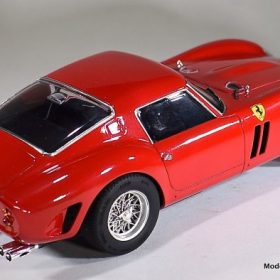 Decals were applied before clear coating with Micro Sol and Micro Set. I never bother with a clear coat before applying decals as lacquer paints are smooth enough and resilient enough to not need it.

The main body was cleared in Splash 2k, mixed per the manufacturer’s instructions. Gloves, respirator, goggles and a strong spray booth are a requirement if you want to use this material, due to its toxicity which is far beyond that of lacquer paints.

For final finishing, the clear was sanded flat after being allowed to harden for a week. After all of the flaws that I could see were taken out of the paint I polished it back up using a Dremel and polishing compounds, a process I’ll cover in a future Paint Booth article 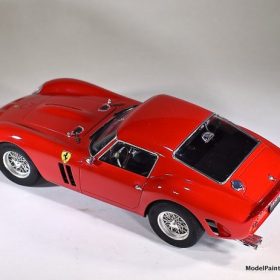 The bits of chrome and details such as the lights were applied with Gator Grip PVA glue, which is a great water based white glue that won’t etch or mar clear parts like cyano-acrylate tends to. I also polished out a seam line in the rear window that created the open vent, which would have looked out of place.

This was a relaxing build until the final stages where the quirks of the kit made themselves evident. I would recommend that if you tackle it, decide early on if you want to have the engine visible or not. The hinge mechanism for the hood is far too fragile to be relied on in my opinion, so it’s best omitted. 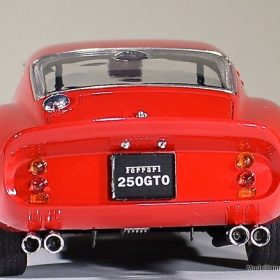 I’m glad I took the time to go back over the finish after the first pass, as it really helped bump the end result up a notch. The kit has some small issues and is not up to the standard of Tamiya’s car kits, but is still perfectly buildable and nothing like the nightmares from companies such as Heller and Lindberg that modelers have faced in the past. Heller’s Jaguar E-Type coupe still makes me shudder in fear at the thought of building another…