(Editors note: Part Two of the V18 ‘Roo series is dedicated to a member of Seattle IPMS who’s become quite distraught at the time it’s taken me to write this final installment. I don’t want to use real names so I’ll refer to him only as Jim B. The situation has escalated to Jim B. showing up at my house uninvited at all hours of the night and day demanding Part Two. He’s a solid 6-footer so it’s a little disconcerting. Moreover, he hasn’t been sleeping and he says he’s off his feed. Jim, this is for you. Read it and get some sleep.      Oh yea, we bought a new house and moved.)

As promised in Part One, Basic Construction and Painting of the Hobby Boss Fw-190 V18, Part Two focuses on some of the tricks used to increase the detail of what is already a pretty nice model.

This kit is a joy to build with no flash and excellent fit of all major components. There are inaccuracies to be sure starting with the wing-fuselage fillets but these are discussed in Part One. The only challenge of the build was the multiple metal finishes on the nose and portions of the fuselage. That said a couple of easy painting tricks (covered in Part One) turned this into a pretty straightforward job.

Similarly, armed with a little experience and a few tricks, the level of detail on most kits can be raised without a huge amount of work. In Part Two we tackle:

1) How to Make Rivet Lines.

In addition, I use the landing gear detail section as a flimsy excuse to include pictures of the 1/1 scale Fw-190 A-5 owned by the Flying Heritage Collection in Everett, Washington. This is a beautifully restored aircraft as the pictures clearly show. 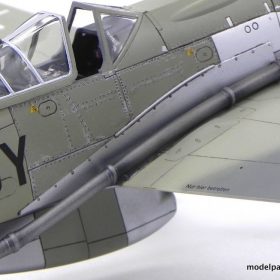 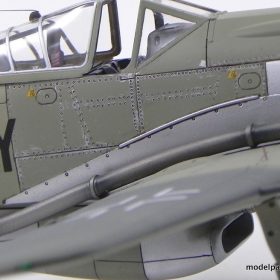 How to Make Rivet Lines:

One of the interesting things about the V18 airframe were the fuselage panels on each side of the cockpit that were clearly re-worked in some fashion leaving fresh, shinny lines of rivets on RLM-02-colord panels.

Volume one of the excellent Smith and Creek Fw190 trilogy provides 6 photos of the V18, four of which are full-page reproductions showing the re-worked rivet lines in the cockpit area. This is how I set about replicating this on my V18 ‘Roo. 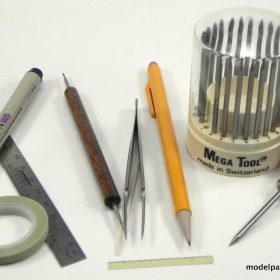 The rivets that are to be replicated appear to have been installed after the skin was painted RLM-02, as each line had unpainted heads and scratches. In preparation for replicating this, lines for the new rivet lines were first drawn on the model with pencil. 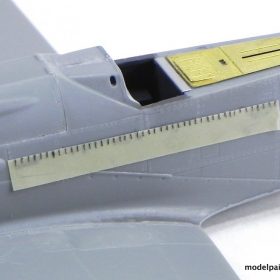 Then using a fine-line pen, I marked 1mm gradations on the tape using the ruler as a guide. I like using plastic tape or Dymo tape for this job. Once marked, the tape was placed along the penciled panel line. To ensure the tape wouldn’t slip during the “riveting”, it was rubbed down with an embossing tool (thin wooden handle in tool picture above). 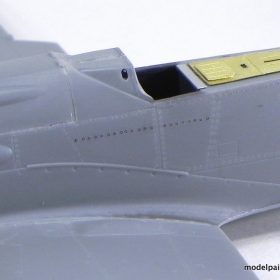 The “rivets” were then embossed using the Mega Tool Embossing Dyes (UMM-USA; large wooden handle in tool picture above). To do this, the embosser was lined up alongside the tape and centered on one of the gradations. To emboss a rivet, pressure is applied to the tool while a slight rotation is added. It’s then a simple matter of following the gradations of the tape along the panel being riveted. Remove the tape and behold, a new line of rivets. Note in the picture the new rivets have been highlighted using an oil wash to aid photography.

The main gear and retraction mechanisms are beautifully cast with no flash. The landing gear parts and wheel well covers were shot with LifeColor RLM-02 lightened 10% with White and diluted to 40% paint with Thinner-5% as detailed in Part One. 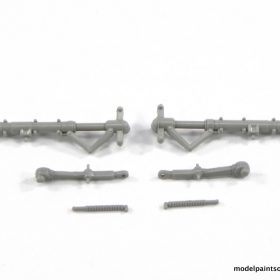 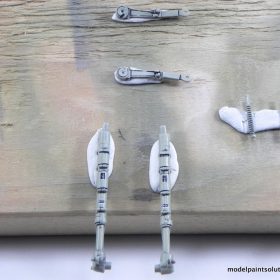 Once dry the gear were given a light coat of Alclad Aqua Gloss (ALC-600) shot straight from the bottle at ~15psi with an H&S Evolution fitted with a 0.2mm tip.

When this was dry gear stencil decals were sourced from the stash and applied using photos of the gear from an A-5 and the Smith and Creek text as guides. After these were sealed with another coat of Alclad Aqua Gloss, details were brought out with Tamiya Brown Panel wash (#87132). 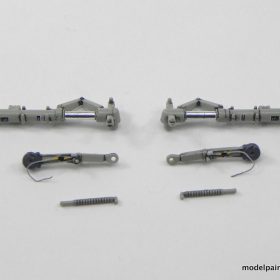 The small electrical relay boxes affixed to the retraction arms were made from Evergreen strip and small diameter solder. I like using solder for such applications. After the piece of solder is glued in place at one end, the remaining length can be coiled up, out of the way for assembly. When ready, this can be un-coiled and glued in place: easy. 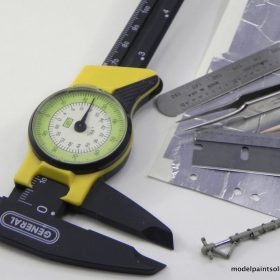 The chromed oleo struts were easily replicated using small pieces of Bare Metal Foil. To do this, I measure the length of the strut with calipers and transfer this onto a sheet of Bare Metal. Using a new razor and a metal ruler, I cut an appropriately sized piece of foil, place it on the gear leg with tweezers, and emboss it in place with a moistened toothpick. To facilitate this work, the gear legs were mounted onto a piece of wood with wads of putty. 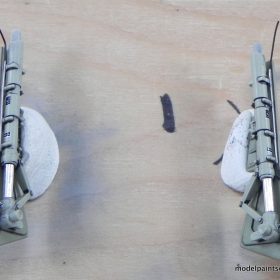 The brake lines were fashioned from fine solder and carefully glued in place with CA. Note the transition at the bottom of the gear leg where the metal brake line mates to a flexible rubber line. This is easily replicated by painting the “rubber portion” of the solder dark gray.

After detailing, the gear were glued in place with CA and the assemblies blended into the rest of the finish by careful application of Vallejo Satin Varnish.

Here are some photographs of Fw-190 A-5 main gear. This aircraft is maintained in airworthy condition by the Flying Heritage Museum at Paine Field in Everett Washington. This is a must see flying museum if you’re ever in the greater Seattle area. 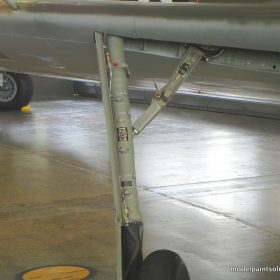 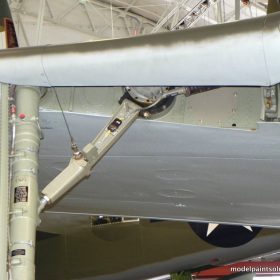 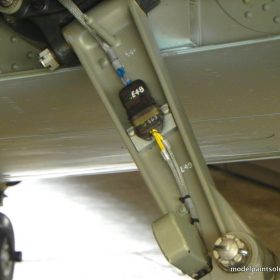 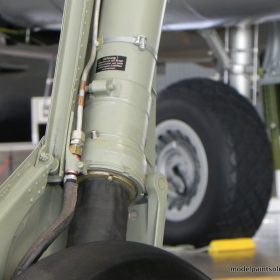 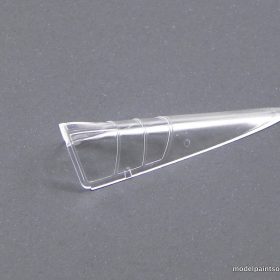 The V18 had a modified canopy in preparation for the installation of a pressurization system for high altitude operations. The canopy was a basic early-style 190 design to which additional gussets and strengthening straps were added. This resulted in a canopy with framing that had both rounded and square corners.

Prior to masking, the canopy was buffed out with a small microfiber swab and Novus Plastic Polish #2. These swabs are great buffing tools for clear plastic. The canopy was then dipped in Future floor wax and sealed in a lidded container to protect it from dust for the 2 day drying time.

The large rounded corners at the bottom of the canopy frame were masked by cutting circles of the appropriate diameter from Tamiya tape using a photo-etch stencil as a guide. 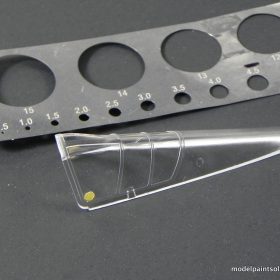 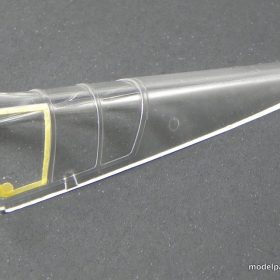 The rest of that frame was then masked off with thin strips of Tamiya tape. The center (unmasked) section was then filled in with Mr. Hobby Mr. Masking Sol R. The process was continued with the other canopy corners and frames until the entirety of the “glass” sections were masked. 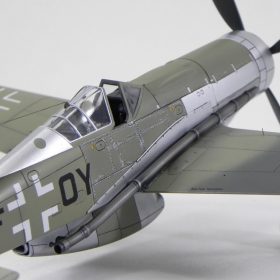 This is a great little trick. Having a nice (read large) assortment of photo-etch stencils to chose from is key to finding just the right sized circle, square, ellipse, or whatever shape the corners of the canopy you’re working on are. Connect the corners with strips, slather on some liquid mask and call it done: simple.

The ends of the exhaust tubes were hollowed out with a small drill bit and the rather annoying seam that runs the length of each exhaust was removed with an X-acto blade and micro files.

After priming with Gunze White lacquer, the tubes were sprayed with AK Steel (AK476) straight from the bottle at 15psi with an H&S Evolution fitted with a 0.2mm tip. 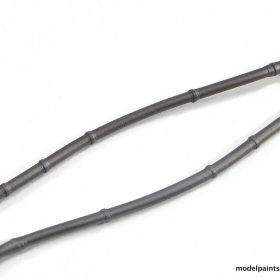 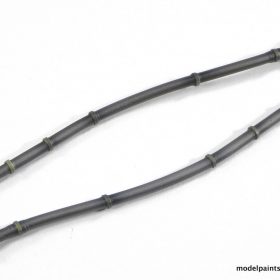 The tubes were sprayed with light misting coats of Alclad Exhaust Manifold (#ALC123) again with an H&S Evolution/0.2mm tip. To add some contrast, the junctions along each tube were masked with thin strips of Tamiya tape. AK Jet Exhaust (AK486) was then carefully sprayed around each junction using an H&S Infinity fitted with a 0.15mm tip. The small tip allows the pattern to be carefully controlled with little/no overspray. 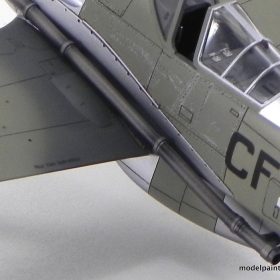 When dry, the tapes were removed and the tubes attached with thick CA glue. A final light misting with Vallejo Satin Varnish blended the exhausts in with the rest of the model but left a subdued metal sheen to the exhausts.

Thanks for reading along. I hope you enjoyed that. I certainly enjoyed building this kit. All of the tricks described in Part Two are simple straightforward techniques that anyone can do with the correct tools and a willingness to practice. A little time invested in detailing assemblies like landing gear and canopies can really make a model stand out as those are things our eyes are naturally drawn to.

Until then, go paint something!