Editors Note: James is a very good modeler with a broad range of interests. He follows up his Star Wars AT-AT Snowspeeder and Meng “King Tiger” with another nicely done Toon” tank: the Sherman Firefly. Nicely done, James! 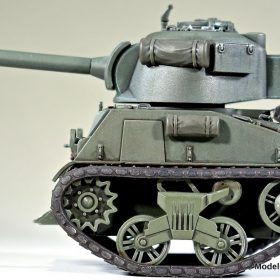 “World War Toons” is a cartoon-like video game that features short, stubby versions of well known armored vehicles from WWII. Meng produces a line of kits that captures the toon-like nature of these vehicles while providing the builder with a lot of very nice details in an easy-to assemble model. 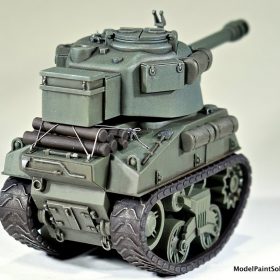 The kit (#WWT-008) was fun and easy to assemble as I have come to expect from Meng. The parts fit perfectly and securely to the point that glue really wasn’t necessary. However Tamyia thin cement was used in a few spots to make things close up and make the seams disappear. Apart from that, the whole kit can easily be assembled with nothing more than an X-Acto knife and a pair of sprue cutters. I prefer to use Xuron Pro cutters. After that a quick seam scrape with the knife and the kit was ready for painting. 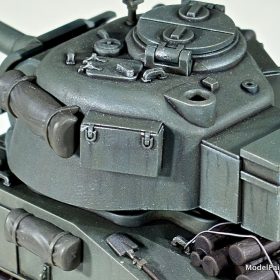 While the editor usually frowns upon it, I applied a base coat of Tamiya TS-28 Olive Drab 2 straight out of the can. No need for a primer as the kit was molded in green and the Tamiya lacquers bite into the plastic quite nicely.

With a nice uniform coat of green to work with I started the weathering process. First, some dark streaking grime from AK interactive (AK024) was applied with a fine point brush in short, sharp streaks starting from the top edges of the sides and especially on side details. After that was dry, a soft brush was used to blend the streaks and draw them out. Using a very soft brush here is important. AK interactive makes a brush specifically for this purpose (AK 576 saw-shape weathering brush). I highly recommend it but a regular soft red sable brush will work. The trick is to have as little white spirit on the brush as possible so as to blend the streaks while not removing them. 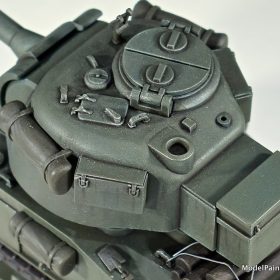 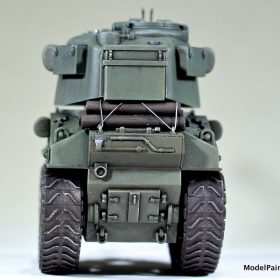 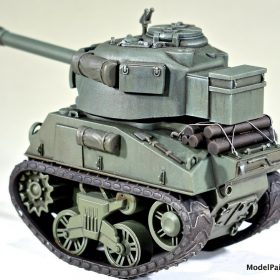 I blot excess spirits on a tissue and then, starting from the top, draw the streak down. Since I don’t add any paint at this point, it will blend. I like to work on either side of the streak so the center stays more solid than the edges. This is when the saw- shaped brush can be real time saver.

A good friend (and modeler) once told me “You always want to sneak up on the weathering.” That’s some of the best advice I can give: don’t over-do it early in the process. 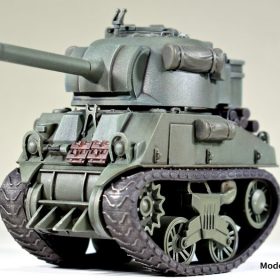 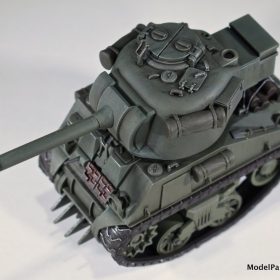 You may notice after applying multiple streaks that some streaks are little light at the top: that’s normal. An easy solution is to re-apply the streaking grime just like last time but now alternate pulling from the bottom making the streak thicker at the top. 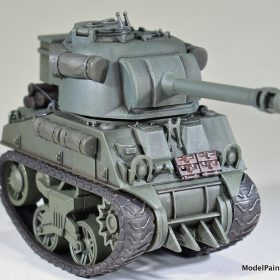 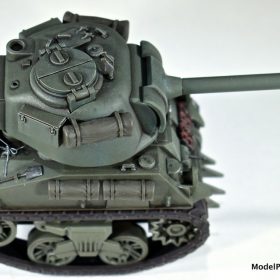 With the streaking complete it was time for a good old pin wash. I used AK interactive dark brown wash for green vehicles (AK 045). After the wash, raised details were accentuated by dry brushing with oil paints. I like using a light buff color for this like Abteilung light flesh tone (Abt 135). With the streaks applied to the open areas, the wash concentrated at edges and recesses, the dry brushing accentuates ridges and raised details nicely giving the model a sense of depth. 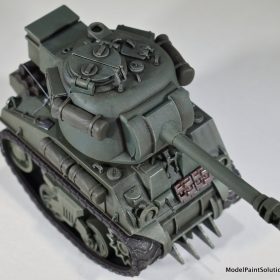 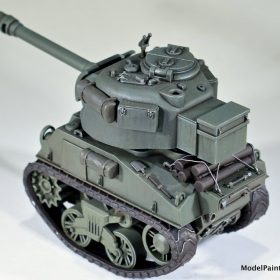 The model was then sealed with Humbrol Matt Varnish (AD6049) straight from the spray can. On a side note, if I were an airbrush-oholic, I might be prone to criticizing the use of something as “crude” as a spray can: just a thought. (Editors Note: Careful James, I know where you work).

With most of the weathering done, I started in on painting the little tools and gear on the tanks exterior. Bare metal tools got a coat of Vallejo Model Color Gunmetal Grey (70.863) while wooden handles and such were painted with Vallejo Chocolate Brown (70.872). A quick dry brushing with silver (oil) over the gunmetal gives it worn look. The wood parts get a quick wash of dark brown wash for green vehicles as used previously. The logs on the back were highlighted by dry brushing with light gray (Abteilung: ABT100). 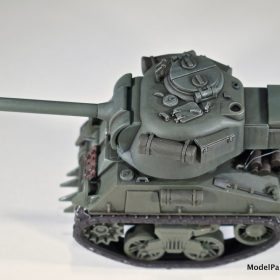 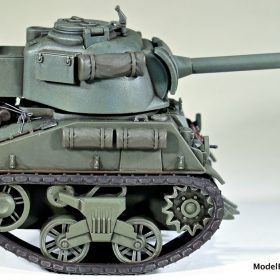 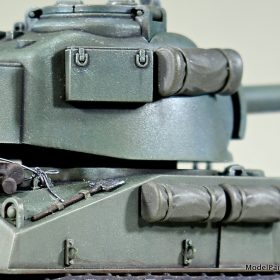 I thought the color that the canvas rolls they were molded in was perfect so I just flat coated them and blended some oils in at the edge of the straps. I like the Starship Filth color (Abteilung: ABT510).

Lastly, the tracks were washed AK Interactive Track Wash (AK083) with a follow-up of the sliver oil dry bushing giving the tracks a nice weathered look. Of note, it was a bit of a struggle to get the tracks on so perhaps putting them on before weathering would have been a better way to go. 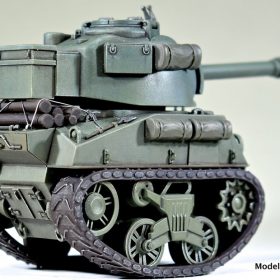 I work at Skyway Models and get a lot of people in the shop that are scared of jumping into weathering. One way of decreasing the stress level when learning weathering is to start out with one of these Meng “Toon” tank kits. They’re cheap, build up quickly, and serve as a great subject for first-time weathering work. Most importantly, they’re just FUN: that’s all that matters.