Hot on the heels of the new Mission Models Chrome master paint mixologist Jon Tamkin, the man behind Mission Models, has released four new shades of metallic paints based on the same forgiving chemistry as the entire Mission Models line. Forgiving is the word. These new metallic paints are easy to spray and the finish is tough enough to withstand enamel-based panel liners and wet buffing with Micromesh.

Moreover, the four new shades of Mission Metallics White and Dark Aluminum, Duraluminum, and Silver are ideal for doing natural metal finishes on aircraft like the P-51, P-47, and T-6 Texan: all aircraft that had the BC-602 radio channel selector (seen in the title image) mounted in their cockpits. 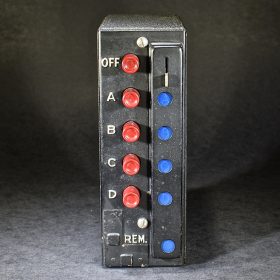 How was that for a smooth and seamless transition as to why I posed the new Mission Model metallic paints with a BC-602 from my small personal collection of cool antique airplane stuff.

This unit is identical to the BC-602 in the Smithsonian collection (except theirs isn’t missing a control knob). Scroll down for more pics and information on the BC-602.

Back to Mission Metallics……

One of the very handy characteristics of the four new shades is that they can be easily blended together to produce a myriad of metallic shades: awesome. When you add that to how forgiving they are to spray and how hardy they are when dry, I suspect Mission metallic paints will get a warm welcome from many a modeler.

Dr. Franz Merkwürdigliebe, Director of the MPS Secret Underground Paint Research Laboratory (and bistro!) has completed a thorough analysis of the new Mission Models metallic paints and the results are resoundingly positive.

The analysis began by applying each of the metallic paints to a sheet of Evergreen styrene plastic previously shot with Mission White Primer that had been wet buffed with 4,000 and 6,000 grit Micromesh. Prior to shooting the primer, the sheet was wiped down with a Kimwipe tissue saturated with a 1:1 solution of Windex and Denatured Alcohol (Crown; “Cleans Glass” on the can).

De-greasing is required to get good adhesion of all primers but this is especially true with acrylic primers that lack the “bite” of their lacquer-based counterparts. Adhesion of Mission Models primer (or any acrylic primer) is usually not a problem with proper degreasing. Most importantly for the job at hand, Mission primers are sturdy enough to be wet buffed with 4,000 grit Micromesh producing a finish sufficiently smooth for metallic paints. 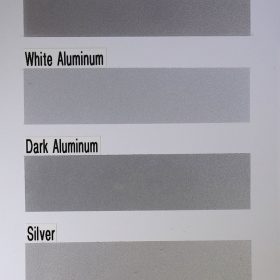 For spraying, Mission Metallics were diluted with Mission Thinner at a ratio of 70:30 (Paint: Thinner). Two drops of Mission Polymix was added per 2ml paint cup and this was sprayed at 12psi with an H&S Evolution fitted with a 0.2mm tip. The working distance (airbrush tip to surface) was 2-3 inches.

The metallics were shot first as a light dry coat followed by a multiple semi-wet coats. The finish of recently applied (read still wet) Mission Metallic has a slightly rough or stippled appearance but have no fear: this will resolve into a smooth metallic finish when dry. Careful use of a hair dryer will decrease drying time to ~1 minue. I found that 2-3 coats were sufficient to obtain a smooth, even, metallic sheen.

Each metallic (White Aluminum, Dark Aluminum, Duraluminum, and Silver) was applied to the White Primer base coat and allowed to dry overnight before further testing was performed. 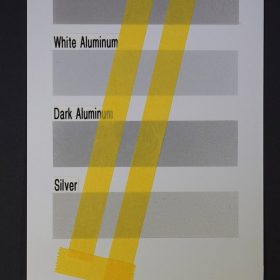 A well-deserved criticism of many metallic paints, (especially acrylic ones) is the sturdiness of the paint when dry. To assess how Mission Models metallic paints, react to taping and over-spray an angled line crossing all four metallic panels was masked off using strips of Tamiya tape taken straight from the roll (no finger oil). 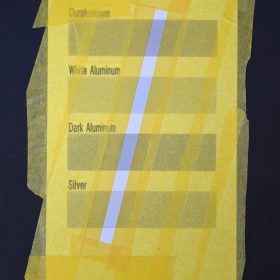 The crew down in the paint research lab got a little overzealous and covered the entire test sheet with Tamiya tape. They just love the tape test. They don’t get out much. 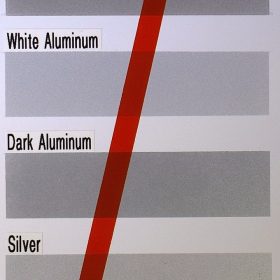 The angled line was then shot with the new Mission Models Insignia Red applied first as a dry coat followed by multiple wet coats.

The strips of Tamiya tape were removed and the panels of the Mission Metalics were examined closely for damage. No paint was removed from any of the metallic panels nor was the sheen of the metallic finish changed in any way: awesome.

This is one of the most hardy metallic finishes I’ve ever experienced. To that point, all the Mission metallic paints have finishes sturdy enough to even withstand enamel-based washes (see below).

Dr. Merkwürdigliebe sums up the results of the tape test best in an excerpt from his laboratory notebook:

Yup, that about sums it up.

The difference in shade between Mission Dark and White Aluminum are quite pronounced but this is a good thing. The two can be easily combined with each other (as well as with Mission Silver and Duraluminum) to produce as many shades as you have the patience to mix.

I suspect the ability to easily mix custom metallic shades is going to make this paint a favorite of aircraft modelers wanting to replicate the many shades of aluminum and other alloys commonly seen on aircraft with natural metal finishes. 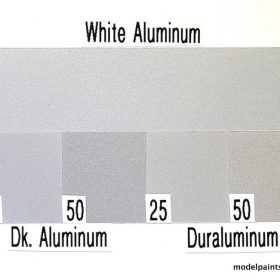 Mission White Aluminum along with the 25 and 50% mixtures of Dark Aluminum and Duraluminum were applied to a sheet of Evergreen sheet styrene previously shot with Mission White primer and wet buffed as described above. 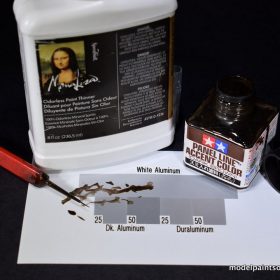 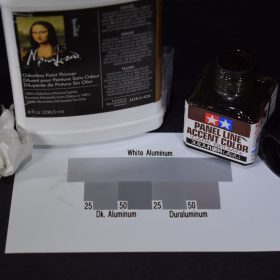 I usually use the Tamiya liner and other enamel panel liners and washes preferring how they behave to water-based versions. That said, before using enamel-based washes on a lacquer-based metallic finish I would protect the metallic with an acrylic clear coat. This trick works great but isn’t needed with any of the Mission metallic paints and that’s pretty handy. 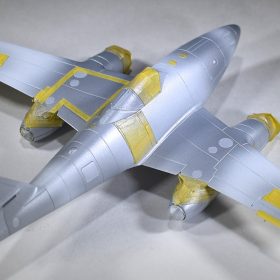 I was so impressed with these new metallic paints that I’ve started painting the new 1/72 Airfix Me-262 in a natural metal scheme. Pictured are access panels and other areas painted with straight White Aluminum and the same darkened with 10% Dark Aluminum.

The first part of a progressive build of the Airfix Me-262 can be found here. The second part of the build and the painting of this model will be detailed in future articles so stay tuned.

The BC-602 was the control box for a four channel VHF AM aircraft Transmitter-Receiver called the SCR-522. The BC-602 was mounted in the cockpit and permitted the pilot to turn the SCR-522 on-off, select T, R, or remote, and to select one of four channels. All other controls were pre-set prior to flight.

I obtained this BC-602 while assisting in the restoration of a North American T-6D Texan in the mid 1990’s. The owner was doing a ground-up restoration to WWII standards and found a BC-602 in better shape than this one, which is missing a small knob. What can’t be conveyed through photography is how heavy the BC-602 is. 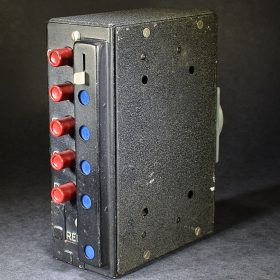 Thanks for reading along and drop me a line at [email protected] if you have any questions about airbrushing in general or the new Mission Model metallic paints.