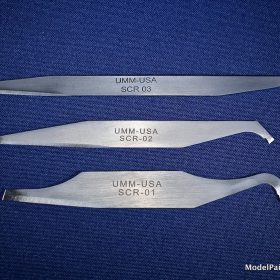 I first used the UMM-01 scriber more than 10 years ago and it quickly became my go-to tool for re-scribing or re-freshening inscribed lines damaged by sanding or fouled by filler. All of the UMM scribers are made from hardened tool steel so they stay sharp after many (many) years of use. Moreover, all the UMM scribers have a V-shaped cutting blade on each end of the tool. This V-shape makes it easy to stay in and follow the contours of previously scribed lines while re-scribing. 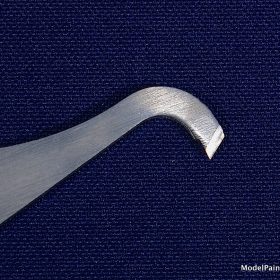 The blade portion of each UMM scriber is very sharp and ideal for scraping seams or hollowing out round or semi-round parts. I also use the blade portion to scribe lines that wrap around the leading edges of wings: a notoriously difficult area to scribe or re-scribe due to the pronounced contour that has to be followed. Using the blade, a pilot line is easily made around wing leading edges by rolling the blade around the edge. The pilot line is then depended appropriately using the hooked end (pulling) or the blade end (pushing). 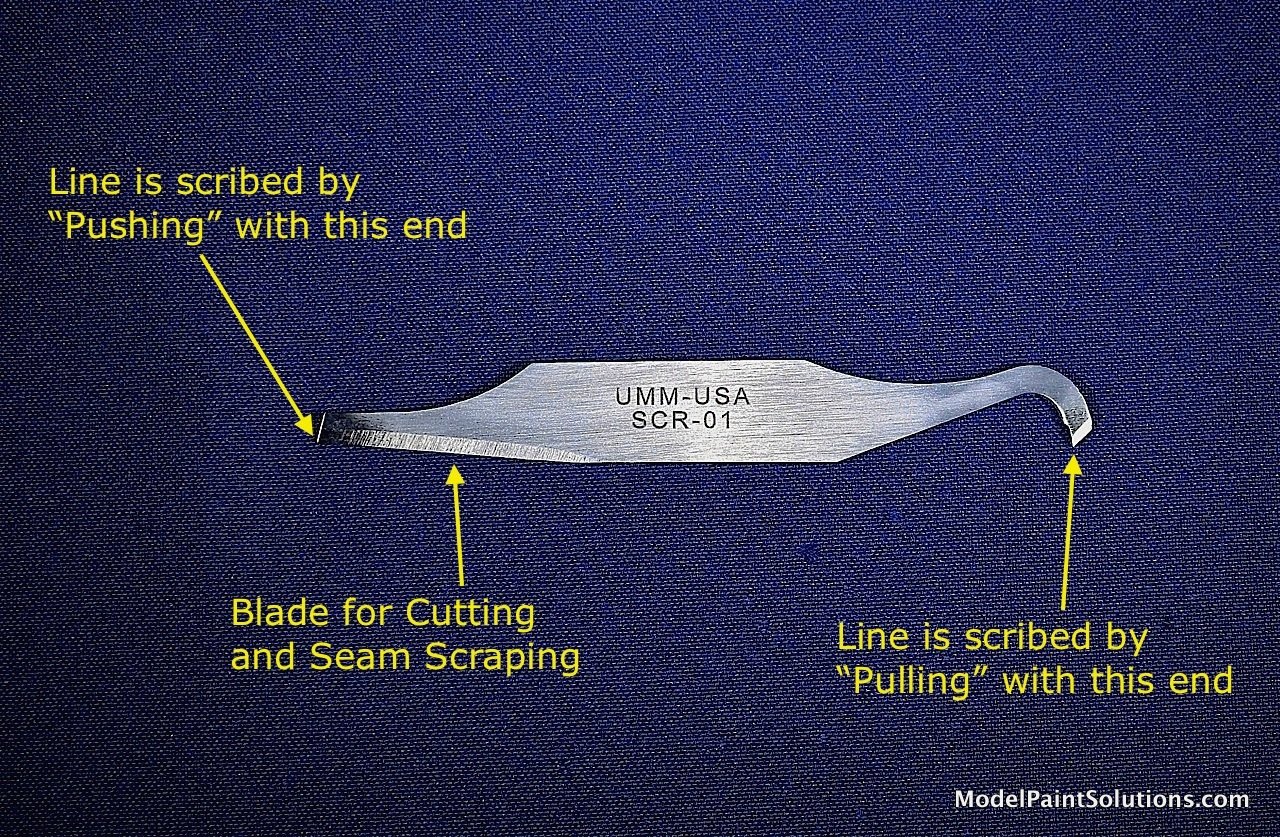 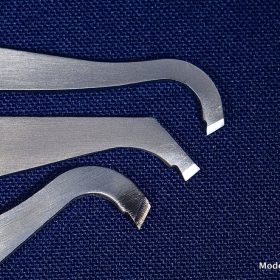 Although all of the UMM scribers have V-shaped cutting blades, each scriber has a slightly different angle to the V. This difference in angle confers a different cutting depth or aggressiveness to each blade. 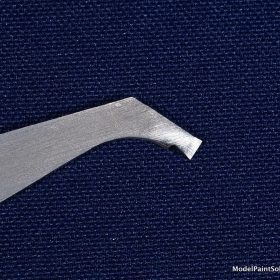 The V-shaped blade of the UMM-02 scriber isn’t as aggressively angled as is the UMM-01 blade. This makes the UMM-02 Scriber ideal for scribing/re-scribing very fine lines in any scale but particularly the smaller scales like 1/72 and 1/144. 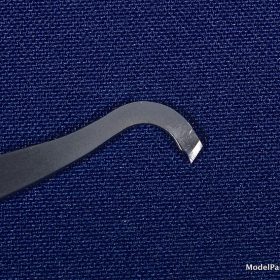 The UMM-03 Scriber is a great blend of the UMM-01 and -02 scribers. The UMM-03 has a V-shaped blade that’s less aggressive  than the UMM-01 but has a longer main body and blade  for scribing hard to reach lines.

The UMM family of scribers: simple, quality tools that last. As with all the tools on Model Paint Solutions, I’ve used the UMM scribers at my bench for years and they pass the test easily.  They’re my go-to scriber for re-scribing or re-freshening inscribed lines and will remain so until someone makes a better tool 🙂 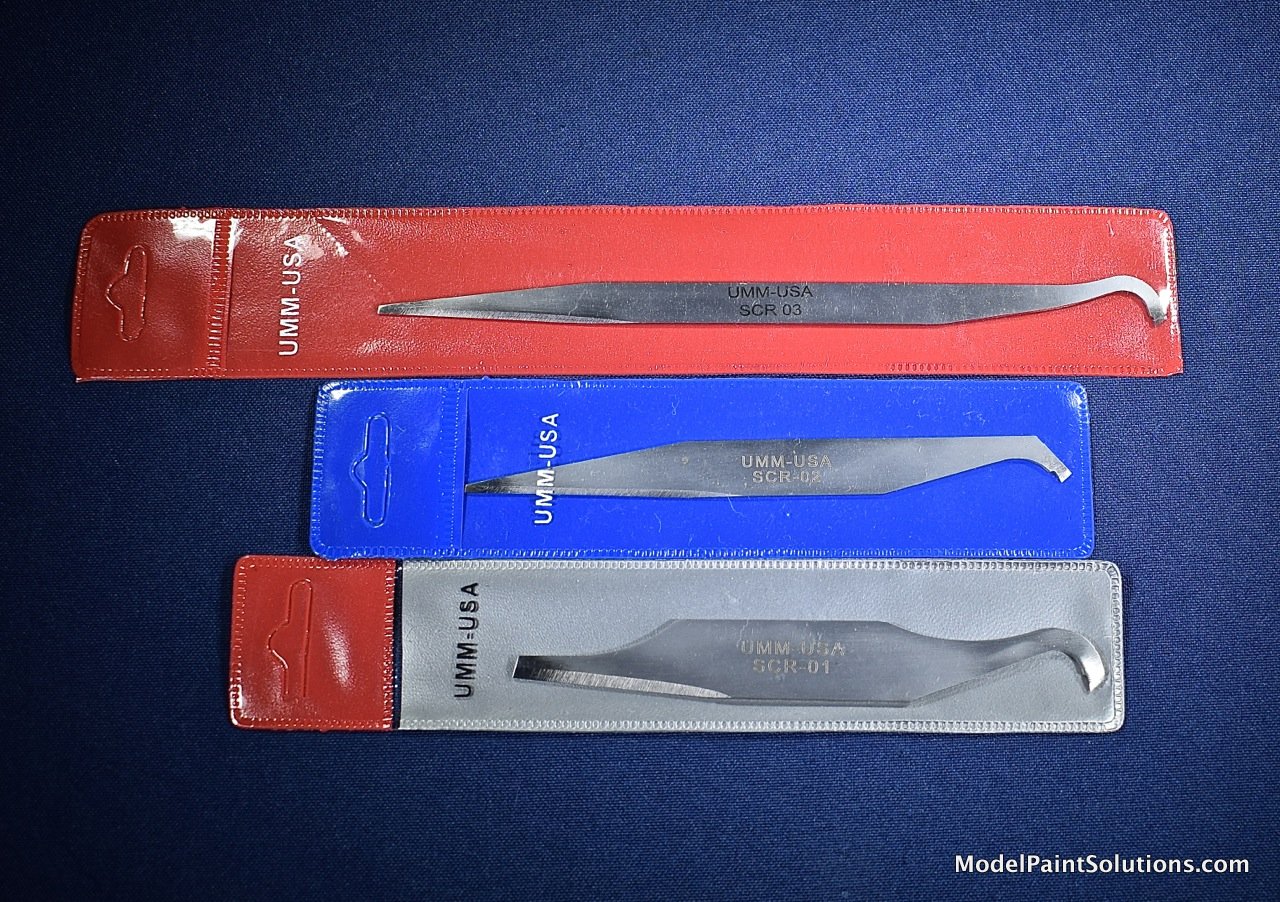 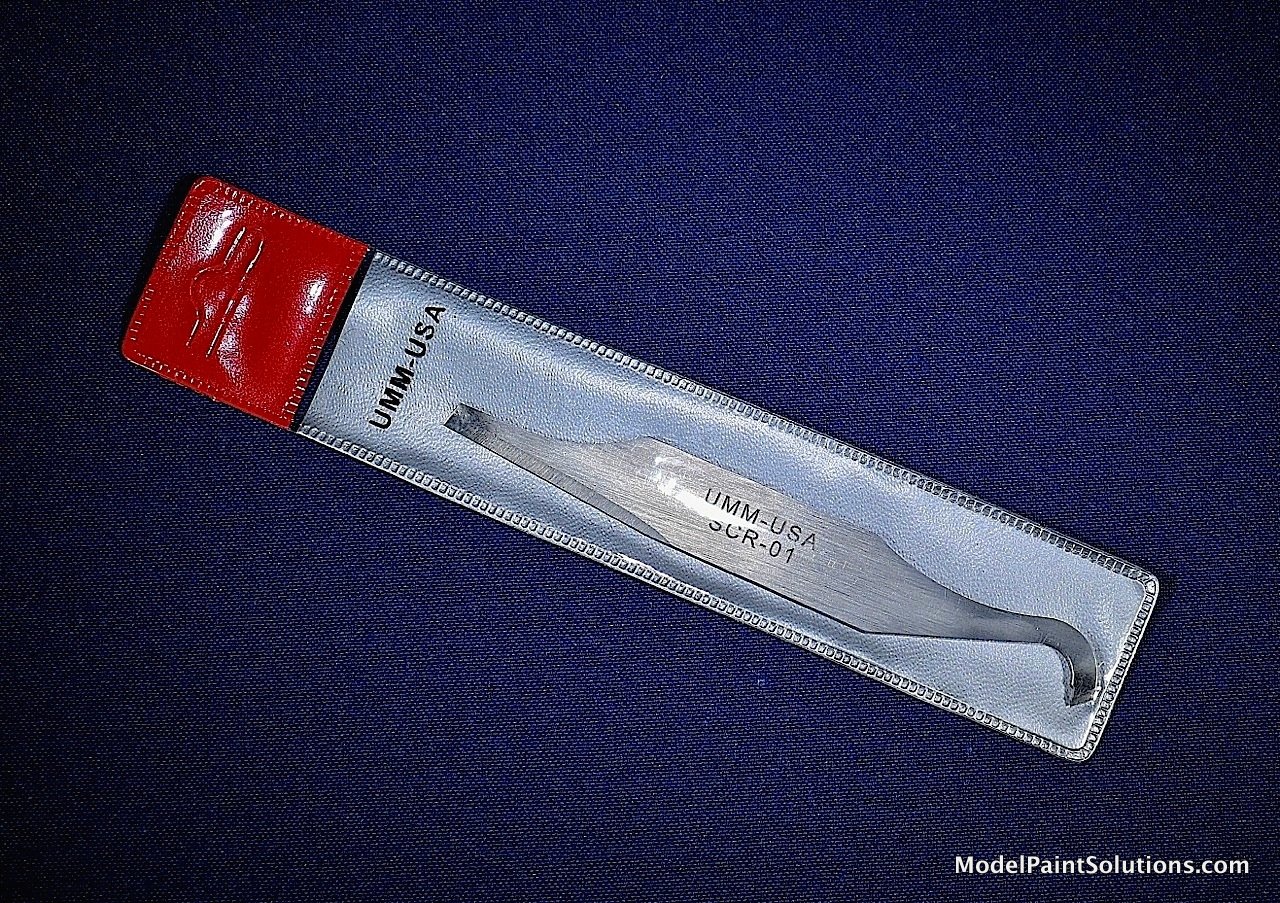 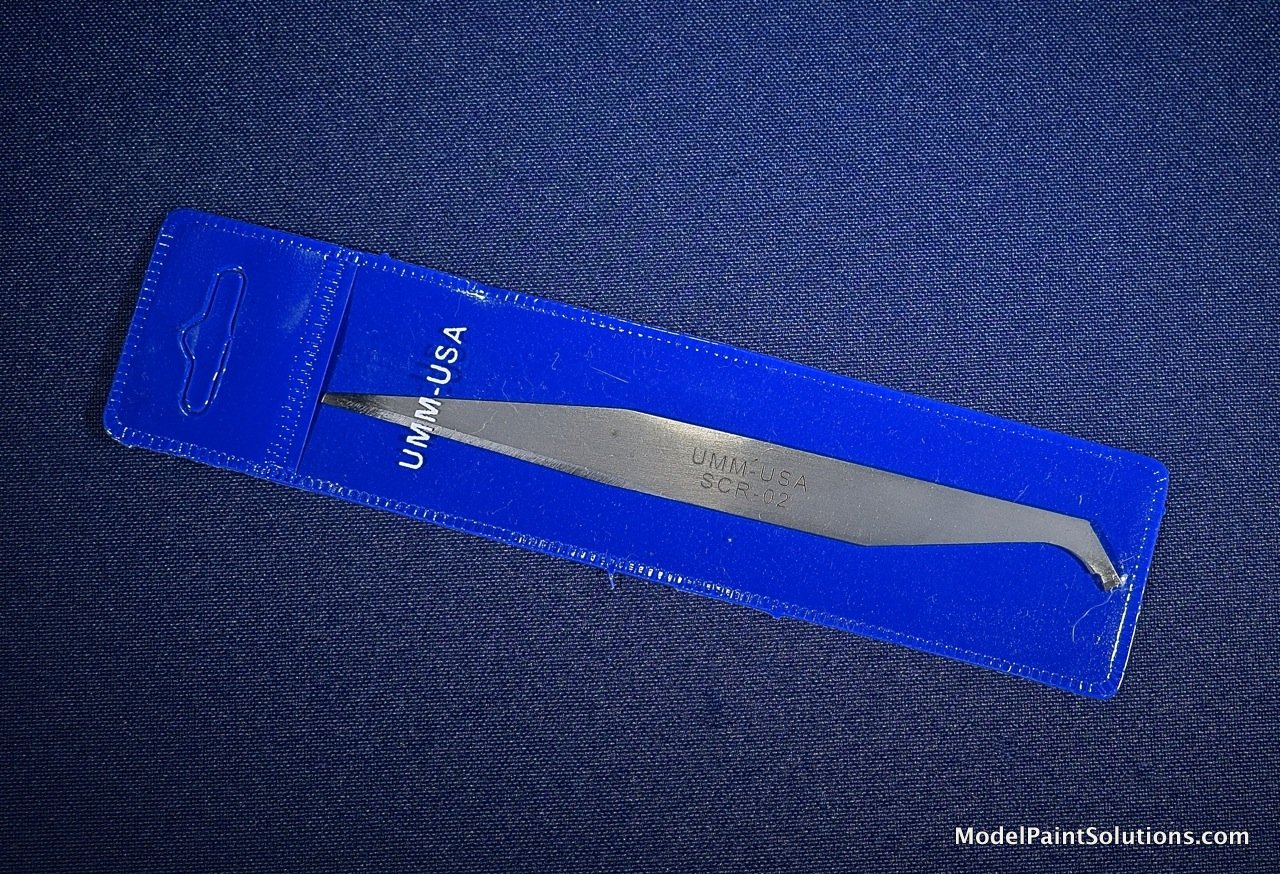 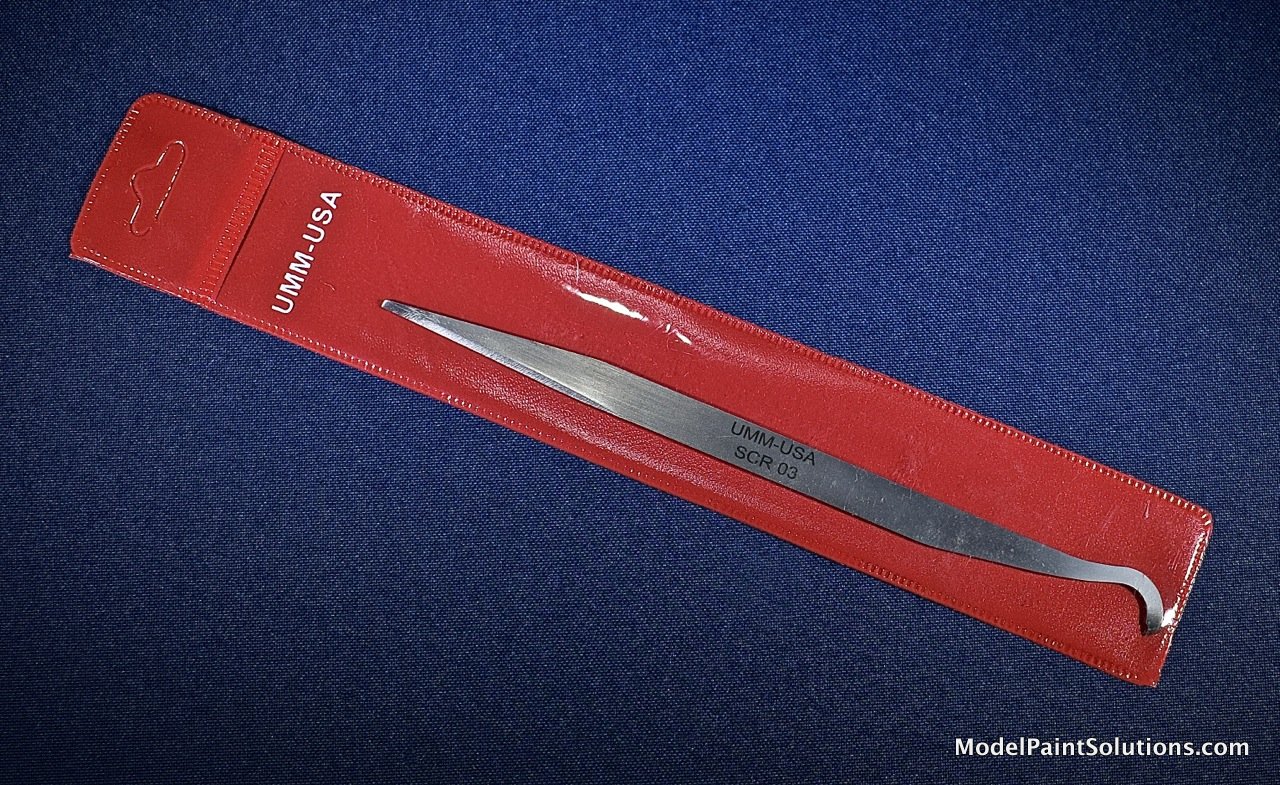