ARMA Hobby is a small company with a penchant for producing quality kits of historically significant aircraft. I was blown away by their most recent kit: the Hurricane Mk.I and, based on that experience, I’ve been looking forward to taking a closer look at some of their other kits in “the one true scale” of 1/72.

The Fokker E.V. was released before the Hurricane but shows the same attention to detail and crisp molding, as does the later kit. Like the Hurricane, this E.V. build relies on a nice selection of PE parts to augment the cockpit and airframe and will look very convincing when assembled. 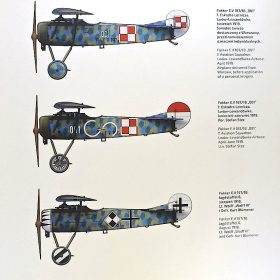 The Fokker E.V was a German parasol-monoplane fighter aircraft designed by Reinhold Platz and built by Fokker-Flugzeugwerke. The E.V was the last Fokker design to become operational with the Luftstreitkräfte, entering service in the last months of World War I. After several fatal accidents due to wing failures, the aircraft was modified and redesignated the Fokker D.VIII. Dubbed the Flying Razor by Allied pilots, the D.VIII had the distinction of scoring the last aerial victory of the war.

In early 1918, Fokker produced several rotary-powered monoplane prototypes. Of these, Fokker submitted the V.26 and V.28, small parasol-winged monoplanes with his usual steel-tube fuselages, for the second fighter trials at Adlershof in May/June 1918. The V.28 was tested with both the 108 kW (145 hp) Oberursel Ur.III and 119 kW (160 hp) Goebel Goe.III, though neither of these engines were ready for operational service. The V.26 utilized the standard Oberursel Ur.II engine, producing only 82 kW (110 hp). While this engine was obsolete, the V.26’s low drag and lightweight meant that it was nevertheless quite fast. The Fokker designs were barely beaten by the Siemens-Schuckert D.III with the complex bi-rotary Siemens-Halske Sh.III engine.

In the end, the V.26 was ordered into production as the Fokker E.V. Four hundred were ordered immediately with either the Ur.III or Goe.III engines. Because neither engine was available in any quantity, all production examples mounted the Ur.II.

The first production E.V aircraft were shipped to Jasta 6 in late July, 1918. The new monoplane was also delivered to Jasta 1, Jasta 19, Jasta 24 and Jasta 36. Leutnant Emil Rolff scored the first kill in an E.V on August 17 but two days later he was killed when his aircraft’s wing collapsed in flight. After another E.V of Jasta 19 crashed, Idflieg grounded all E.V aircraft. Pending the investigation of these wing failures, production ceased at the Fokker Flugzeugwerke. According to Fokker, the wing failures were caused by the army technical bureau, which had forced him to modify the original design by over-strengthening the rear main spar. This faulty design allegedly caused the wing to twist and fail. Fokker claimed that this defect was resolved by reverting to his original design.

According to most other accounts, the source of the wing failures lay not in the design, but in shoddy and rushed construction. Fokker had subcontracted construction of the E.V wings to the Gebrüder Perzina Pianoforte Fabrik factory. Due to poor quality control, inferior timber had been used and the spar caps, forming the upper and lower members of each spar assembly, had been placed too far apart during the fabrication. Because the resulting spars were vertically too large to pass through the ribs, excess material was simply planed away from the exposed upper and lower surfaces of the cap pieces, leaving the assembled spars dangerously weak. Other problems included water damage to glued parts, and pins that splintered the spars, rather than securing them.

Tests showed that, when properly constructed, the original E.V wing had a considerable margin of safety. Satisfied that the basic design was safe, Idflieg authorized continued production after personnel changes and improved quality control measures were introduced at the Perzina factory.

Deliveries resumed in October. At the direction of the Kogenluft (Kommandierenden General der Luftstreitkräfte), Idflieg redesignated the modified aircraft D.VIII. The earlier “E.” and “Dr.” prefixes for fighter monoplanes and triplanes, respectively, were abolished and all fighters would henceforth receive the “D.” prefix instead. The D.VIII commenced operations on 24 October with Jasta 11. The aircraft proved to be agile and easy to fly. Allied pilots nicknamed it the Flying Razor, presumably because it resembled a cocked straight razor in flight.

Jasta 5 was issued a D.VIII. The famed ace Erich Lowenhardt performed a test flight of a Fokker E.V. whilst paying a visit to Jasta 6 in the summer of 1918, but no evidence of him flying this aircraft on any other occasion exists to date.

A total of 381 aircraft were produced, but only some 85 aircraft reached frontline service before the Armistice. Some reached Italy, Japan, the United States, and England as trophies, but most were scrapped in accordance with the terms of the Armistice.

The Polish Air Force captured 17 aircraft, but only seven (six E.V and one D.VIII) were in airworthy condition. All were used against Soviet forces in the Polish-Soviet War of 1919-1920. Lieutenant Stefan Stec earned the first kill for the Polish Air Force, by shooting down a Ukrainian Nieuport 11 Bébé fighter on 29 April 1919. In 1921, the remaining Fokkers were withdrawn from front-line units and transferred to the Szkoła Obsługi Lotniczej (Air Personnel School) at Poznań-Ławica airfield.

In an end-opening box adorned with colorful artwork of a Polish E.V. shooting down a Ukrainian Nieuport 11 Bébé is one grey sprue, a PE fret, a small piece of acetate, and two colorful decal sheets. 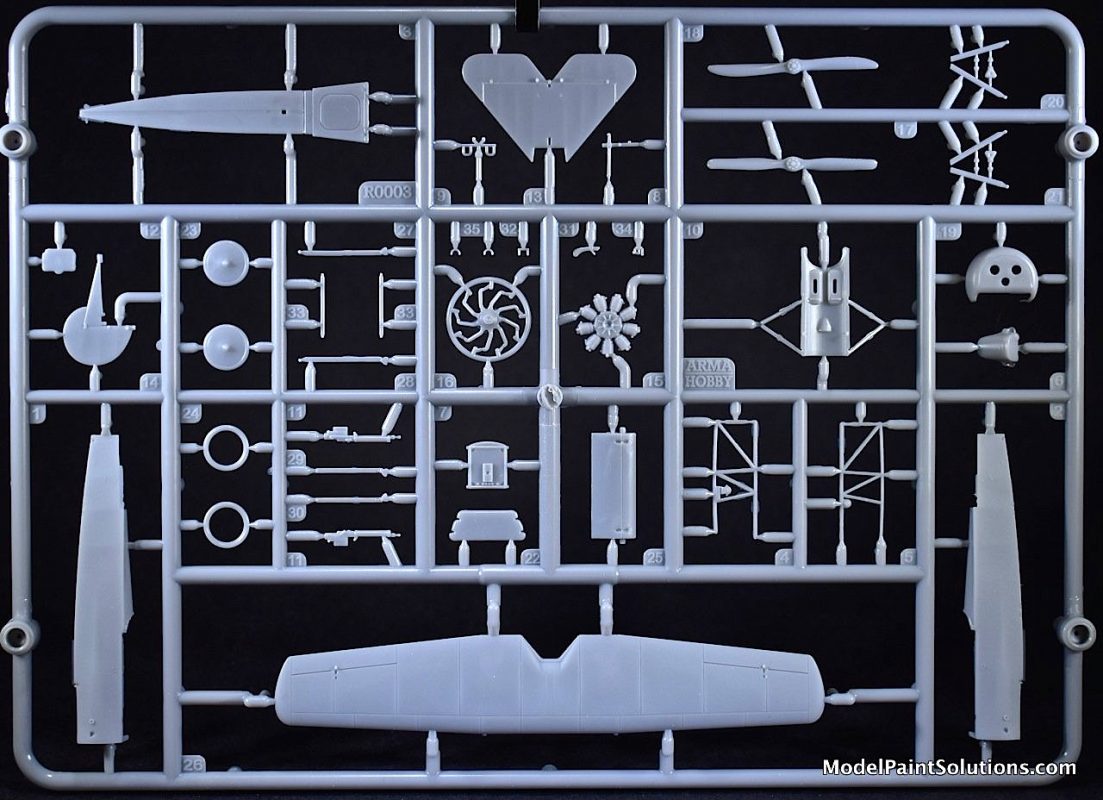 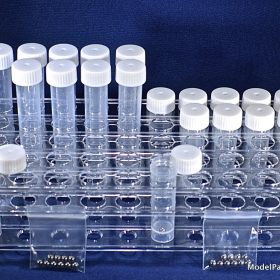 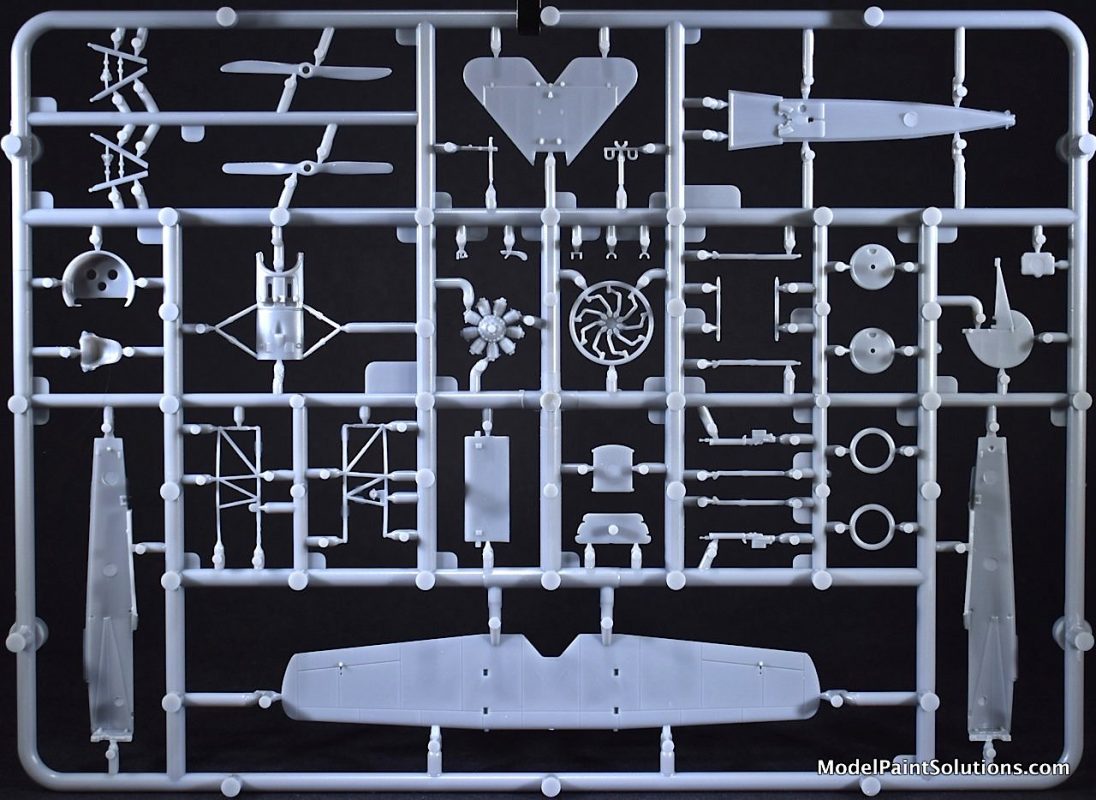 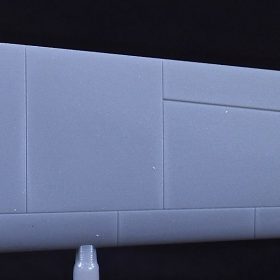 Surface details (inscribed and relief) are beautifully rendered and scale-appropriate with fabric effects that are subtle and convincing. Parts layout and assembly are both quite conventional and will allow for a straightforward build. 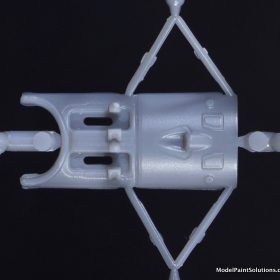 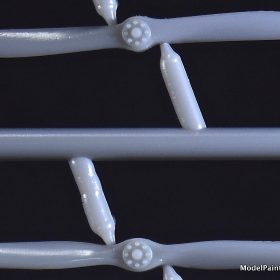 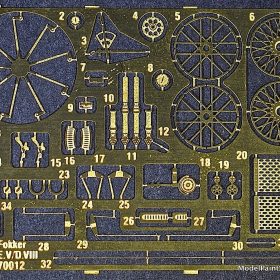 Assembly begins with the cockpit complete with tube frame and multiple PE parts including lap belts, footplates, and compass. Once assembled, the fuselage is further detailed with PE louvers, and cooling jackets for the gun barrels: very nice. 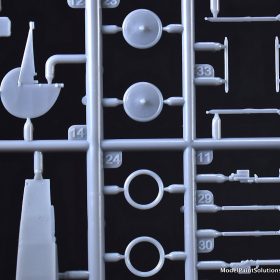 With addition of the vertical stabilizer-rudder and horizontal stabilizer-elevator, which are single-piece parts, the fuselage is complete. To enhance the level of detail Arma provides PE elevator and rudder horns complete with lengths of “cable” that will look very convincing and save the builder a lot of time versus scratching building these details.

A very nice piece of engineering is the built-in jig that assists with aligning and gluing the main gear V-struts in place. This would be a difficult job that Arma makes a lot easier. 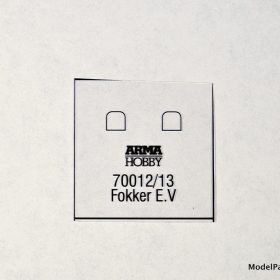 I see no hidden issues laying in wait. The parts count is rather low and the engineering is thoughtful and conventional. This looks like it will be a quick and enjoyable build.

The decals, by Cartograph, are crisply printed with good registration and color density. 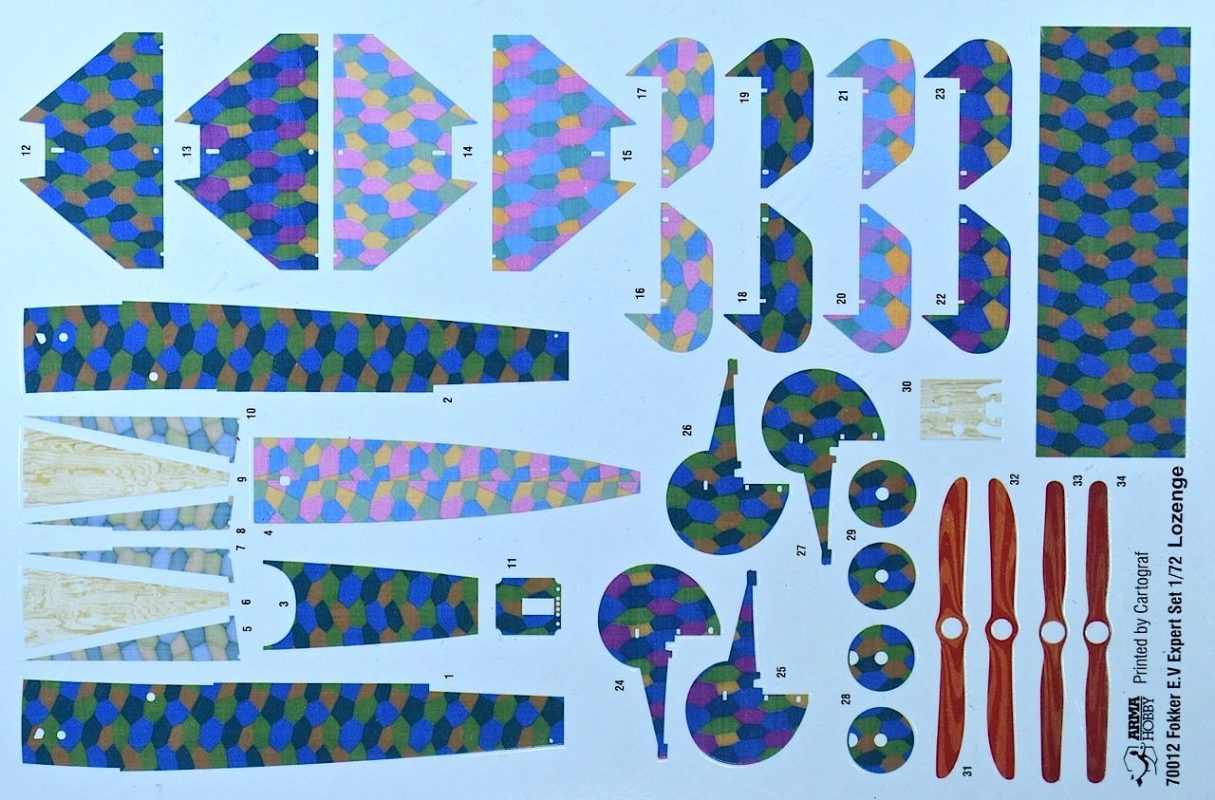 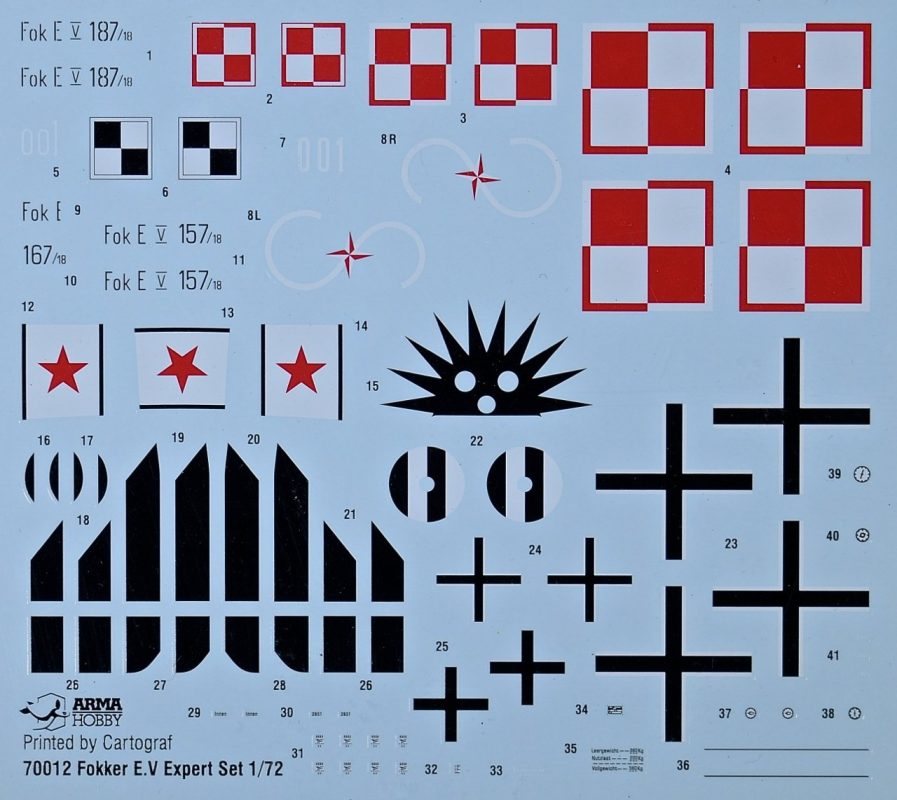 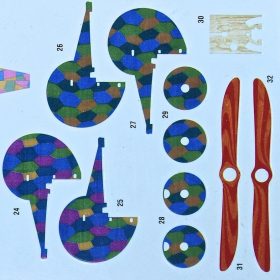 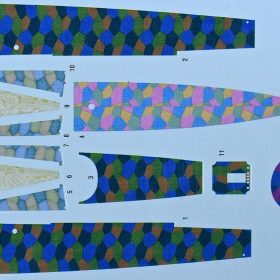 Markings for 4 colorful schemes are provided as follows: 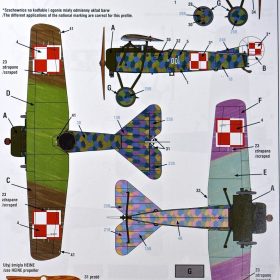 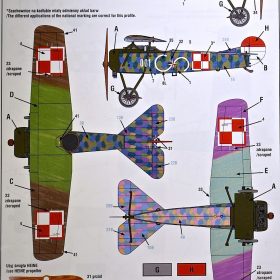 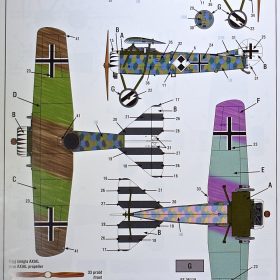 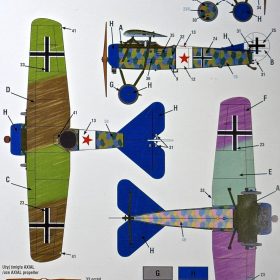 There’s a lot to like in this little, colorful box. The molded details are beautifully rendered and abundant. The nice array of PE details and the quality decal sheet will make the completed model a head-turner. Highly Recommended!