Looking like the result of a romantic tryst between a Messerschmitt 109 and a Beechcraft Bonanza: this is the “V-tailed” Bf-109 G-0. My fascination with this airplane began sometime ago.

It was in the bookstore of the Smithsonian Air and Space Museum circa 1977, when I purchased “Messerschmitt: An Aircraft Album No.2 by J. Richard Smith (pictured). Check out that price of $3.95 for a 144-page book! Yea, I’m old. 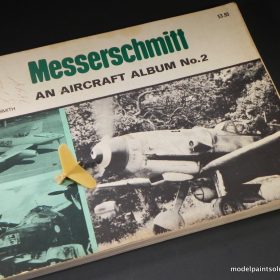 I was 14 and bought it, in part, because of a photo it contained of the very unique Me-109 “V-Tail”. There are reportedly only three photos of this rare beastie. The photo in the Smith book is from the rear of the airplane with the canopy open.

Having been smitten with the -109 early this, to me, was a fascinating piece of Messerschmitt trivia. My small display shelf already had a couple of built 1/72 -109’s and my search for a V-Tail variant was thus born.

Sixteen years later while perusing resin aircraft tidbits at a modeling show I find an Me-109 V-Tail modification kit composed of a single piece of rather rough resin (pictured). “Rough” is really being kind.

Although I’ve contemplated using it many times, this piece has sat in my -109 parts box ever since: the crudeness of the casting and lack of information on the airframe stopped me from diving in. 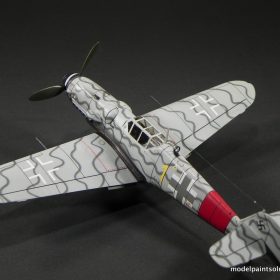 AZmodels has now solved my dilemma. I have built the AZmodels G-6 in the cool Night fighter squiggle scheme and found it to be one of the most detailed -109’s I’ve seen. This G-0 is very similar in detail and layout. It’s not a Tamigawa so there will be some extra effort required but this kit is worth it.

Messerschmitt Bf-109 G-0 Werknummer 14003 was one of the first three G-0 airframes produced at the Regensburg plant in October 1941. It received the V-tail modification and was evaluated by the Messerschmitt flight test department in early January 1943. The results of those evaluations are reproduced in their entirety in Luftfahrt-Band 5 (reference below). 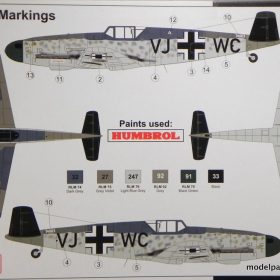 AZmodels provide a summary of the details from this report in the kit instructions and this is very welcome as finding information on this rare bird is a challenge. Nicely done AZmodels. Here’s a brief summation of some of the details unique to Bf-109 G-0 #14003:

3) Had an F-4-type canopy that lacked the armored headrest.

4) Fitted with an F-type tail wheel.

5) The airframe had no antenna mast but was fitted with twin aerials strung from the tips of the ruddervators to an unknown point on the fuselage.

6) Had F-style fuselage strengthening strips up to the new tail cone.

8) The airframe had the standard camouflage of 76/74/75 with large round mottling characteristic of the period. The modified tail cone was bare aluminum and the fins were reported to be a dark color such as RLM-66, -70, or even -22.

I have to say up front that I like AZmodel kits. They’re not Tamigawa’s so some extra effort will be required to assure a good fit is achieved among the major parts: nothing beyond someone with a little experience.

Based on my experience with the AZmodel Me-109 G-6, many of the parts and general design are similar to this G-0-based kit (#AZ7545) the engineering of which is straightforward and conventional. 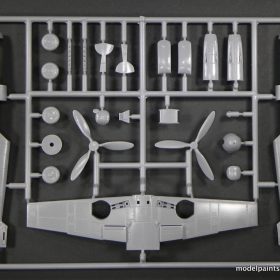 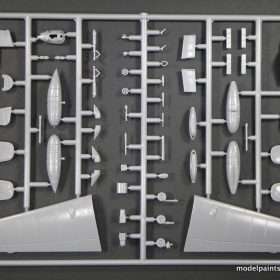 The gray plastic is slightly soft and easy to work with. Most of the inscribed details are as good as a Tamigawa though some are a bit soft and will require re-working with files and a scriber. The overall surface texture is slightly rough in some areas but this is easily addressed with a little wet buffing.

The fidelity of the details on such parts as the cockpit parts, wheels, gear doors, exhausts, and upper nose cowl are beautifully rendered. The cockpit side panels are integral to the fuselage halves and are very nicely detailed. Some careful painting here will produce a great result. 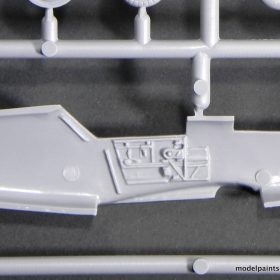 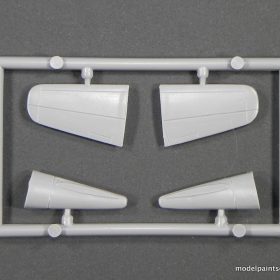 The only challenge to assembly will be removing the conventional tail cone prior to adding the V-tail modification. Luckily, this occurs along a prominent fuselage panel line making this job a little easier. The modified tail cone and ruddervator’s are supplied on separate sprues as is a replacement upper cowl piece and two 7.9mm gun barrels. 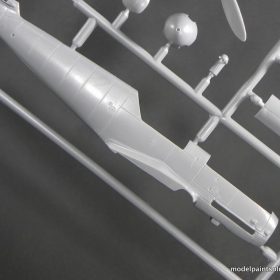 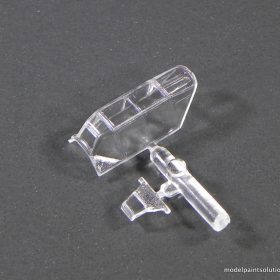 The clear and nicely detailed canopy is supplied as one piece-closed. Bit of a bummer here as lot of that cockpit detail can’t be seen with a closed office. However, the lack of an headrest should open this cockpit up more than on most -109’s of this scale. 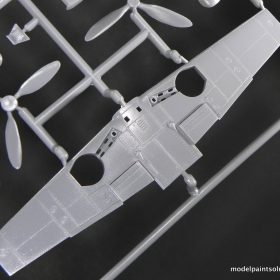 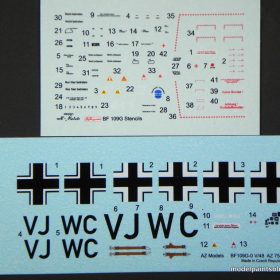 Markings for just #14003 are provided. These come on two small sheets, both printed by AZmodels. The decals are in perfect register and have appropriate color intensities. The airframe stencils are particularly nice showing amazing fidelity of detail. Of note are seat harness decals that look surprisingly good. I may have to skip using my go-to seat belts (Eduard) and give them a try: very nice. 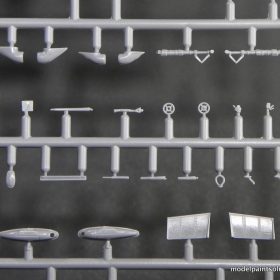 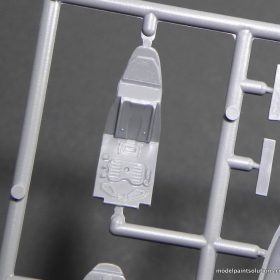 This is simply an awesome kit! As I said I’m biased as I already think the AZmodels -109’s are some of the best kits of the aircraft available in this scale. There will be some extra work but it’ll be well worth it as the result will be truly unique.

So smitten was I that by the time this review was complete, I’d started the kit. Oops, I hate when that happens. The V-tail is on my workbench and is proving to be a blast to assemble. 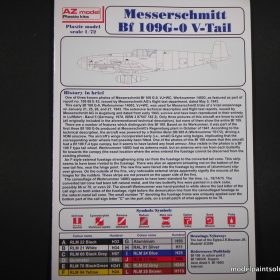 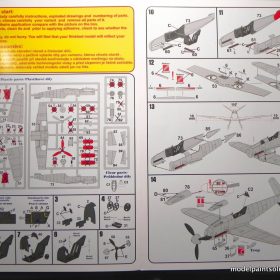 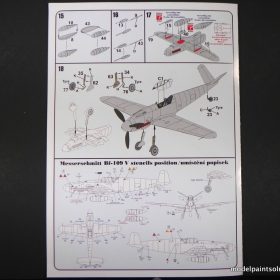