Well, the evil proprietor of Skyway Models did it again and strategically placed a kit right in the middle of his shop that just had to come home with me: like a moth to a flame. I have a weakness for biplanes in general and in larger scales it seems, with each passing year. That said this new Jungmann was just too much of a temptation. If ever there was a biplane with a “fun to fly” look about it, the Jungmann would be it.

I had the good fortune to meet a gentleman and his beautifully restored Jungmann while ramp ratting around small airports in the Pacific Northwest of the mid 1990’s (yea, I’m old). Over a cup of coffee we discussed flying and maintaining the plane then he gave me the full tour of his Bü-131. It was a short tour. The Jungmann is a very tiny airplane on par size-wise, with many home-built experimental aircraft but exudes a sense of both strength and fun. What a beautiful little airplane. Fabric covered wings and fuselage, flying wires, fixed gear, wooden prop, and a tail wheel: now that’s flying 🙂

As with a 1:1 Jungmann, this 1/32 scale version is surprisingly small but has a wealth of detail. ICM have done a commendable job with the inscribed details, surface textures, and overall engineering of this kit. Well done, ICM. Keep ‘em coming!

After serving in the Kaiserliche Marine in World War I, Carl Bücker moved to Sweden becoming the managing director of Svenska Aero AB (not to be confused with Svenska Aeroplan AB, SAAB). He later returned to Germany and started the Bücker Flugzeugbau GmbH: founded in Berlin-Johannisthal in 1932. The firm’s first aircraft to enter production was the Bü 131 Jungmann. 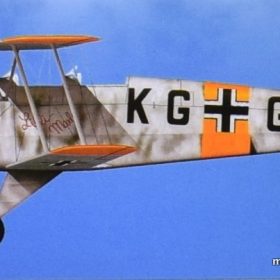 The Bü 131A had two open cockpits in tandem and fixed landing gear. The fuselage was constructed of steel tube covered in fabric and metal while the wings were wood and fabric. The Bü 131A was equipped with the 80 hp (60 kW) Hirth HM60R. In 1936 the Bü 131B was introduced with the more powerful 105 hp (78 kW) Hirth 504A. Wartime production of the Bü 131 for the Luftwaffe was performed by Aero in Prague.

Sturdy and agile, the Bü 131A was first delivered to the Deutscher Luftsportverband (DLV). The Bü 131B was selected as the primary basic trainer for the German Luftwaffe, and it served with virtually all the Luftwaffe‘s primary flying schools during the war, as well as with night harassment units such as Nachtschlacht Gruppen (NSGr) 2, 11, and 12. Other wartime operators include Yugoslavia, Bulgaria, and Romania.

Production licenses were granted to Switzerland (94), Spain (530), Hungary (315), and Czechoslovakia (10). Japan built 1,037 for the Imperial Japanese Army and 339 for the Japanese Naval Air Service (IJNAS). In Spain, production continued at CASA until the early 1960s and served as the Spanish Air Force’s primary basic trainer until 1968.

The Jungmann in Civilian Hands:

In the 1960s and early 70s the Spanish, Swiss and Czech governments sold their Jungmann’s to private owners with many being exported to the United States. About 200 Jungmann’s survive to this day, many having been fitted with modern Lycoming O-320 (150 hp) or O-360 (180 hp) four cylinder engines with inverted fuel and oil systems for aerobatic flight.

Current owners and pilots prize the Jungmann for its outstanding handling characteristics when compared to other antique bi-planes and even more modern aerobatic types. Upkeep and maintenance for the Jungmann is comparable to other antique aircraft and is superior when fitted with Lycoming engines. Airframe parts are available from several sources both in the United States and Europe. 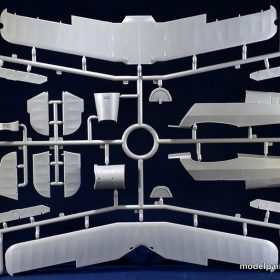 Three sprues carrying 89 light grey styrene parts and 4 parts in clear plastic comprise the kit. For a 1/32 scale biplane the parts count is surprisingly low. The surface details, especially the fabric textures, are nicely done and scale appropriate. Despite being a limited-run kit, the sprue gates are surprisingly small facilitating damage-free separation of the parts from the sprues.

Construction begins by affixing the upper wing halves onto the full-span lower wing and adding the single-piece, poseable ailerons. Next, the nicely detailed cockpit floor composed of steel-tube framing is assembled onto the lower wing center section. 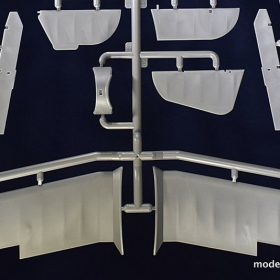 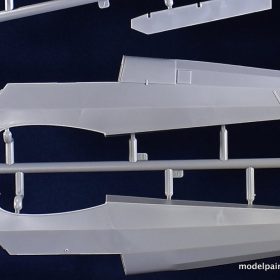 Continuing with the cockpits, nicely molded throttle quadrants are added to additional pieces of tubular framing, which are then glued into each fuselage halve. 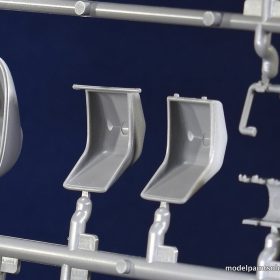 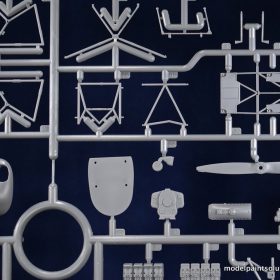 Super detailers are going to have a blast as both the front and rear cockpits have sizeable doors that can be posed closed or open. That being the case, details of the front and rear offices will be very viewable from either side of the completed model. The nicely detailed instrument panels are molded in clear styrene and the instrument faces are provided as decals. The combination should be quite convincing. 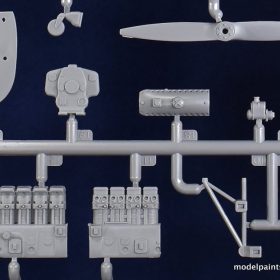 Concurrent with assembly of the fuselage the instructions direct the builder to assemble the Hirth 504A. Much like the cockpits, those with a penchant for detail will be tempted to add to what is already a nicely detailed engine and pose the model with one or more of the cowls open.

Once the engine, complete with well-detailed bearers, is joined to the firewall, the addition of multiple nose cowl pieces, nose bowl, cockpit side doors, and horizontal stabilizers is completed next. With the fuselage assembled, the upper and lower, full-span halves of the upper wing are joined followed by single-piece, poseable ailerons. 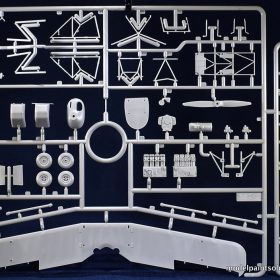 At this point the instructions suggest you add the interplane and cabane struts to the upper wing then join this assembly to the fuselage/lower wing. Since the strut attach points aren’t keyed (facilitating the appropriate angle) I suspect the builder will have use an alternate method for this step.

Addition of the single-piece and poseable elevators and rudder are next in sequence followed by the nicely detailed landing gear assembly. The landing gear struts and x-shaped center support are nicely molded, as are the wheels, which are assembled from halves. 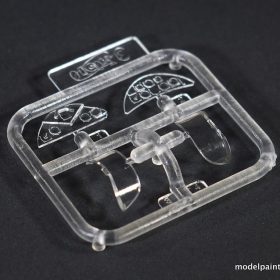 The clear parts, which include the windscreens and instrument panels, are crystal clear and nicely molded. 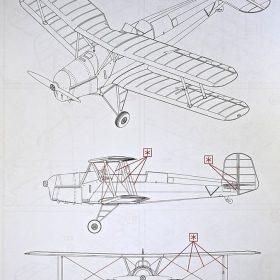 A nice inclusion is the detailed diagram showing the rigging clearly marked in red: very handy.

With such straightforward and simple engineering this should be a very enjoyable build. I see no potential issues that shouldn’t be handled with a bit of patience. 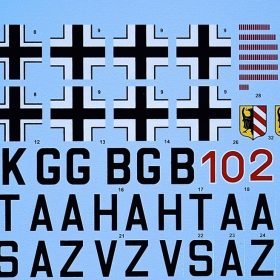 The decal sheet, printed by ICM, has good registration and and appropriate color and hue. Markings are provided for 4 schemes as follows:

Same aircraft as above (KG+GB) in the summer with overall RLM-71 (Dark Green) uppers with RLM-65 (Light blue) lowers.

Aircraft (TA+AH) is overall RLM-02 (gray) with the number “102” in red with white outline on the both sides of the fuselage. 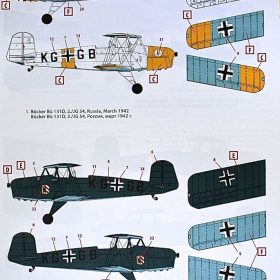 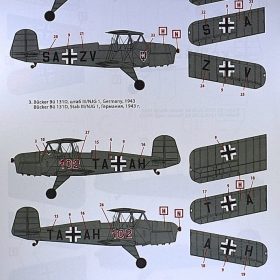 This is a very nice kit. The surface textures and inscribed details are scale appropriate and restrained. The parts count is low, the engineering is simple, and the building sequence is straightforward. This would be a great model for someone’s first foray into large-scale biplanes. For those inclined to detailing, the dual cockpits and engine compartment give ample opportunities to add to what is already a nicely detailed model. Highly Recommended! 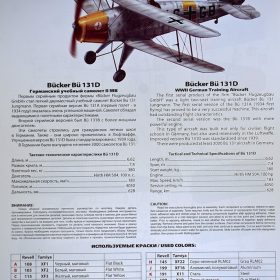 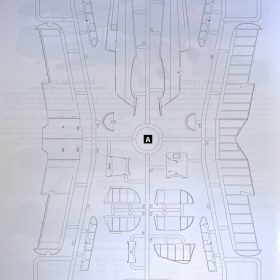 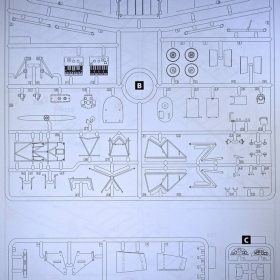 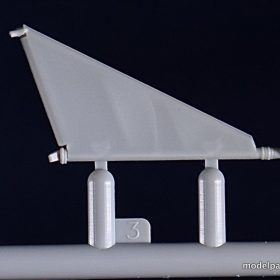 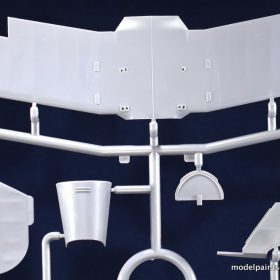 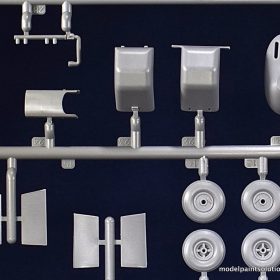