In the early 1960s, European air forces considered requirements for the coming decades. One of these was for a new jet trainer to replace the Lockheed T-33 and Fouga Magister. The British and French collaborated on development of what was supposed to be a supersonic jet aircraft in two versions: trainer and light attack aircraft. The result was the SEPECAT Jaguar: a full-sized, nuclear-capable strike fighter. Two-seat Jaguars were used for operational conversion but not for general training leaving the original trainer requirement unfulfilled. In lieu of this, the French collaborated with West Germany yielding a joint specification in 1968. Of three proposals submitted, one by a consortium of Dassault, Breguet and Dornier was accepted for development in 1970. Interestingly, the German air force insisted that all proposals were to be powered by twin SNECMA Turbomeca Larzac turbofans given the severe attrition from accidents the Luftwaffe experienced operating the single-engine Lockheed F-104 Starfighter. Manufacture of Alpha Jet sub-assemblies was divided between France and Germany, with plants in each country performing final assembly and checkout. Alpha Jets used as trainers in the French Air Force were termed Alpha Jet E for the French word Ecole meaning school. The Luftwaffe used the Alpha Jet mainly in the light strike role, preferring to continue flight training in the southwestern United States on American trainer types. Different avionics packages make French and German Alpha Jets easy to tell apart, with French planes featuring a rounded-off nose and German a sharp, pointed nose. Although France and Germany were the primary users, other countries that operated the Alpha Jet include Belgium, Egypt, Ivory Coast, Morocco, Nigeria, Qatar, Togo, United Arab Emirates, and Cameroon.

It’s hard to find a wing nut that doesn’t like to looks of the Alpha Jet. Small and sleek: wings hung at a pronounced anhedral and often painted in really attractive schemes. The Alpha Jet is one of my favorites and I’m more of a prop guy. As far as accurate models are concerned, the Alpha Jet has been quite underserved. The old and now hard to find Esci kit was soft on detail and rather basic. The newer resin Alpha Jet from PJ Productions is very nice but pricey. With this kit Kinetic has provided us a reasonably priced nicely detailed injection molded Alpha Jet that was badly needed. I suspect this will be a popular kit and one that will generate numerous after market details. Let’s take a look. 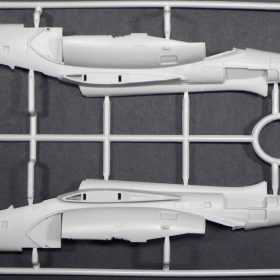 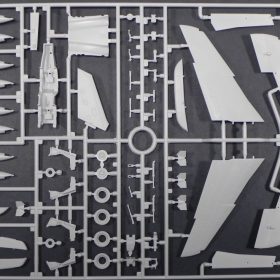 The Kit: The kit comes in an amazingly thin box with nice art on both the top and bottom of the box-different. All sprues come in their own re-sealable bags; something I really appreciate. The instructions, decals, and a small PE fret are stored together in one bag. The instructions, while nicely drawn, are black and white Xerox copies. Color images of the three schemes covered by the decals would have been nice. The required paint colors are provided in a table that includes Vallejo, Model Air, Mr. Color, and Italeri Acrylic paints. The light grey plastic parts feature nice but slightly soft engraved details that may have to be freshened up with a scriber in some areas. The sprue attach points are rather thick and there is flash on some parts that will have to be cleaned up. 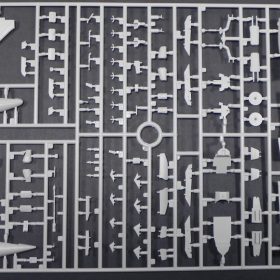 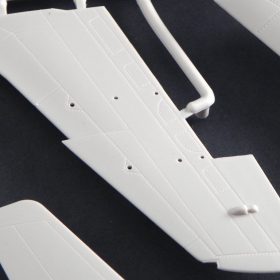 Parts are provided to build either a B model or a late A or E. Care will have to be taken during assembly to ensure that various intakes and antennae peculiar to the version you are building are used. Martin Baker Mk.10 seats are provided that are assembled from 6 nicely detailed parts that should look convincing when assembled. If you wish to build an earlier Luftwaffe A model however, aftermarket Stencel seats will have to be acquired. The seat harnesses and HUD are provided on a small PE fret. The HUD is composed of 1 PE part and 3 clear parts and should look quite nice when assembled. The cockpit tub features nicely rendered raised detail that will benefit from careful painting and highlighting. Likewise the instrument panels are nicely detailed. 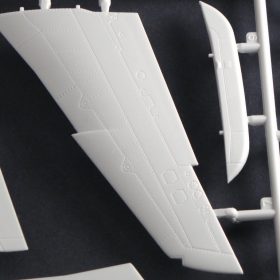 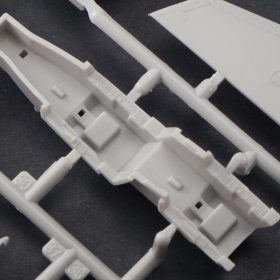 The kit can be built with positional flaps and air brakes, hard points with auxiliary tanks, ventral gun pod (small and large), and canopy opened or closed; very nice. The wheel wells, nose and main gear are assembled from multiple parts and are nicely detailed. A nice feature is the inclusion of separate parts for the landing lights on the main gear that will facilitate scratch building appropriate lenses. Unfortunately, Kinetic opted to engineer all the wheels such that they are assembled from left and right halves producing a nasty seem that will have to be dealt with; oh well.

The clear parts are stored in a re-sealable bag and feature slightly raised details that will make masking easy yet still look to scale. Although clear, the parts have a slight distortion that is evident when you try to read text through them. This will undoubtedly detract from the nicely detailed cockpit and seats should you opt to build your Alpha Jet with the canopy closed. 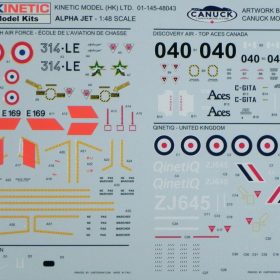 The decals are printed by Cartograph: a company known for producing quality decals and these are no exception. They are in good register with colors that look appropriate. Decals are provided for three aircraft:

Of the three, the Canadian scheme is the most eye-catching. That said, given the multitude of interesting schemes worn by the Alpha Jet, the decals are a bit of a let down. However, I have no doubt that there will be many aftermarket sheets available in the not too distant future that capitalize on the myriad of schemes worn by this aircraft through the years.

This is a very nice kit of a subject that has been undeserved for quite a while. Although the detail is bit soft in some areas and there’s some flash to contend with, it should build up into a very nice looking model. While doing this review I became so pleased with the kit that it’s now on my “short list” of future builds. Well, as soon as some snazzy aftermarket decals arrive–bring on the tiger stripes! If, you’re an Alpha Jet aficionado, I highly recommend it.