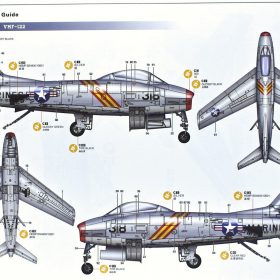 The North American FJ-2 and FJ-3 Fury are a series of swept-wing carrier-capable fighters produced for the United States Navy and Marine Corps. The FJ-2 resulted from an effort to navalize the United States Air Force’s F-86 Sabre. These aircraft feature folding wings, and a longer nose landing strut designed to increase angle of attack upon launch and to accommodate a longer oleo to absorb the shock of hard landings on an aircraft carrier deck.

Although sharing a U.S. Navy designation with its distant predecessor, the straight-winged North American FJ-1 Fury, the FJ-2 and -3 Furies were completely different aircraft. The later FJ-4 Fury was again, a complete structural redesign of the FJ-3. The FJ-2 was one of the first aircraft used to evaluate the first steam catapult on a US Navy aircraft carrier.

The first production FJ-2 flew on 22 November 1952 and incorporated modifications specific for carrier operations including a widened main landing gear assembly, folding outer wing panels, and a modified windscreen affording a better view during approach. The FJ-2 also featured an all-moving “flying tail” without dihedral. Because of problems experienced during launches with steam catapults, a number of FJ-2 later received a stronger nose wheel strut. Outwardly, the FJ-2 was hard to distinguish from an F-86, apart from Navy paint and the muzzles of the 20 mm cannons. The engine was the General Electric J47-GE-2, a navalized version of the J47-GE-27 used in the F-86F. The naval modifications of the FJ-2 had increased the weight of the airframe by about 500 kg over the F-86F, but had not succeeded in delivering a fully carrier-capable fighter. A decision had already been made to give it to land-based squadrons of the US Marine Corps.

Due to demand for the F-86 in Korea the FJ-2 was not produced in large numbers until after that conflict had concluded. Only seven aircraft had been delivered by then end of 1953, and it was January 1954 before the first FJ-2’s were delivered to a Marine Squadron, VMF-122. The Navy preferred the lighter F9F Cougar due to its superior slow-speed performance for carrier operations, so the 200 FJ-2’s were delivered to the United States Marine Corps. The Marines did make several cruises aboard carriers and attempting to solve the type’s handling problems, but the FJ-2 was never really satisfactory for carrier operations. By 1956, the FJ-2 had been withdrawn from front-line service and was retired from reserve units by the following year.

On three sprues of light tan styrene are ~173 parts that want to be assembled into a 1/48th FJ-2 Fury. The overall impression is a positive one. Surface details are crisply rendered and scale-appropriate. A close examination of the sprue attach points reveals they’re respectably small and there’s very little flash. 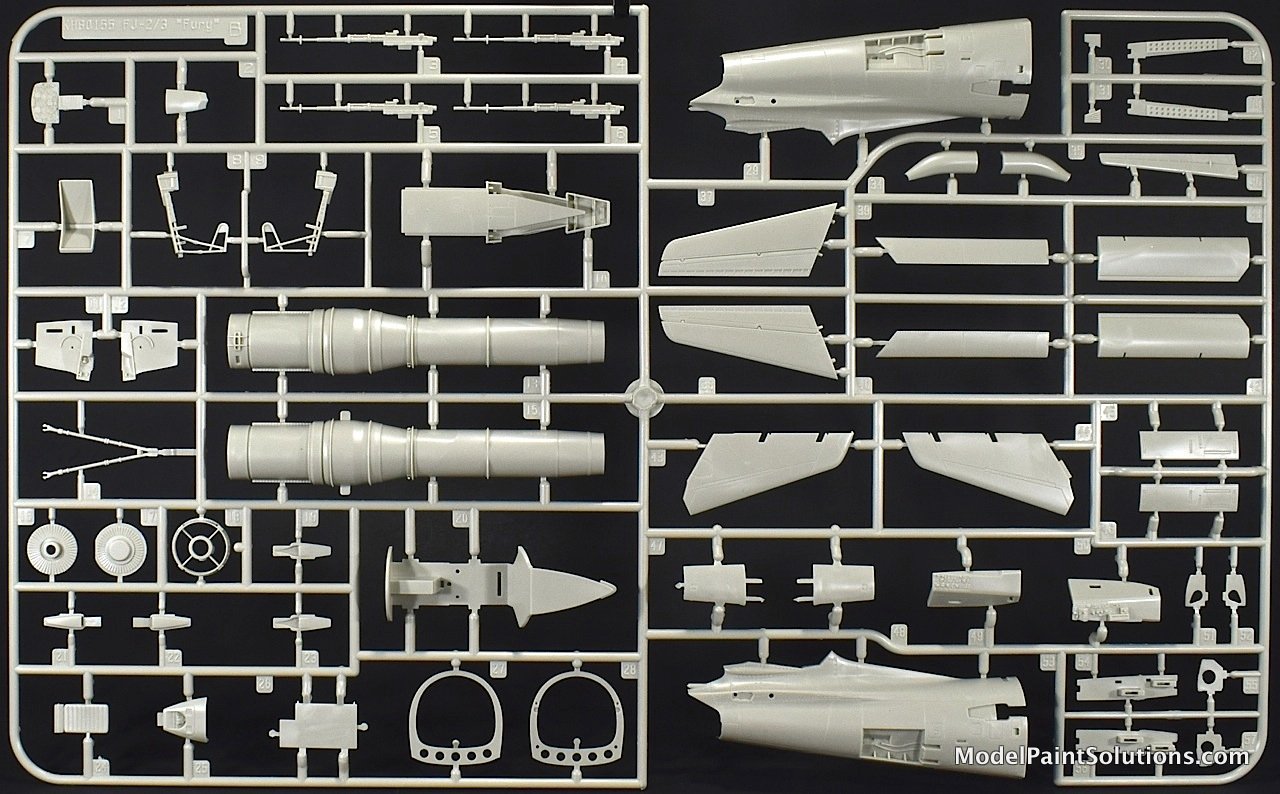 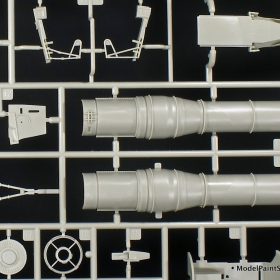 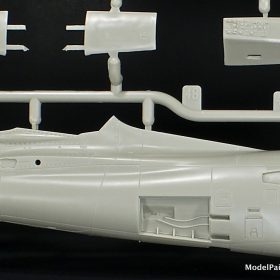 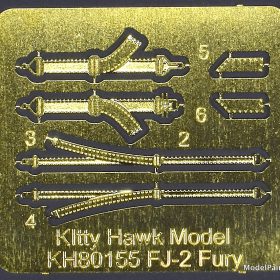 Layout and engineering are conventional. Assembly starts with the cockpit (as usual) and the detail here is more than sufficient for this scale. The inclusion of a PE seat harnesses is nice. The four 20mm cannons w/ ammo feeds are very nicely molded and the access panels can be posed open to show off the ample detail here. 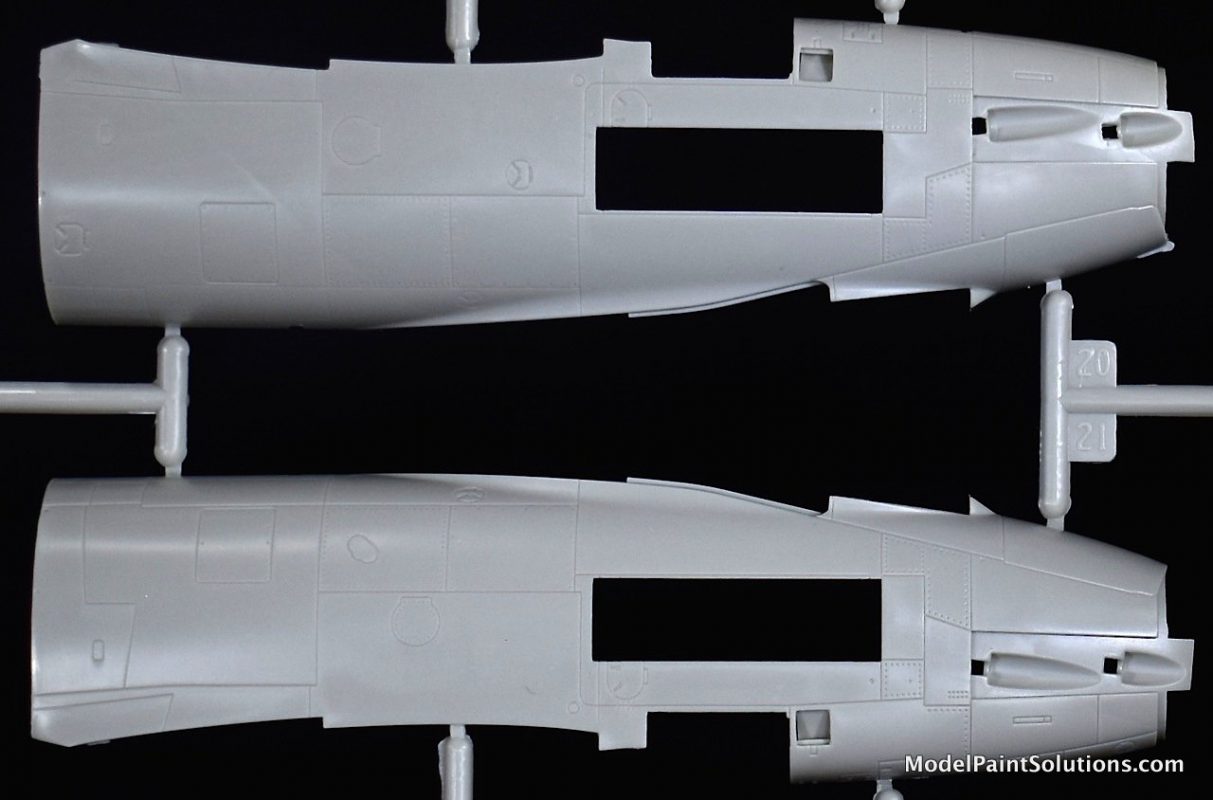 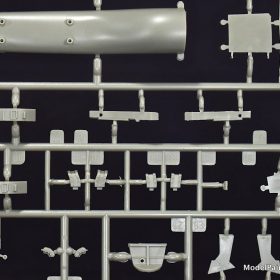 The fuselage is built in foreword and aft sections containing (roughly) the cockpit/gun bay and engine, respectively. The detail provided in the aft (engine) section is almost as nice as that in the cockpit. Alas, much of the engine details will be hidden when the fuselage is assembled. That said the super detailers out there might see an opportunity to pose their FJ-2 split, as during assembly or major maintenance; there’s a lot of detail here.

Note: There are two bulkheads (Parts B27 and B28) that fit into the mating surfaces between the fore and aft fuselage sections. I spent some time test fitting the parts on my bench (after a thorough clean-up) and they fit perfectly. However, I can see where a slight miss-alignment between B27 and B28 could lead to a step at that fuselage join that would be a real bugger to fix, doable but a lot of work. I took the time to assess this particular aspect of the assembly based on comments from a fellow IPMS Seattle member who built the kit and produced a really nice looking model out of it. Nonetheless, I would suggest a lot of test fitting between all the major components involved in this step of the assembly before committing with glue. 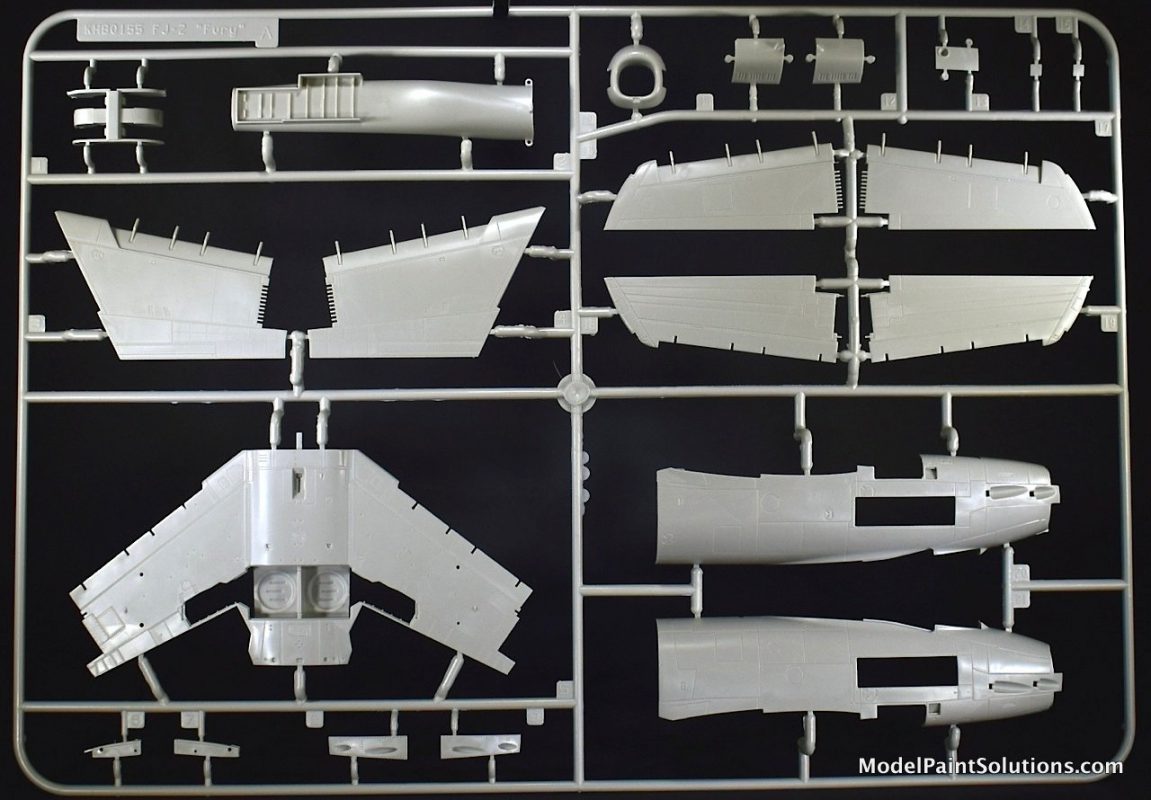 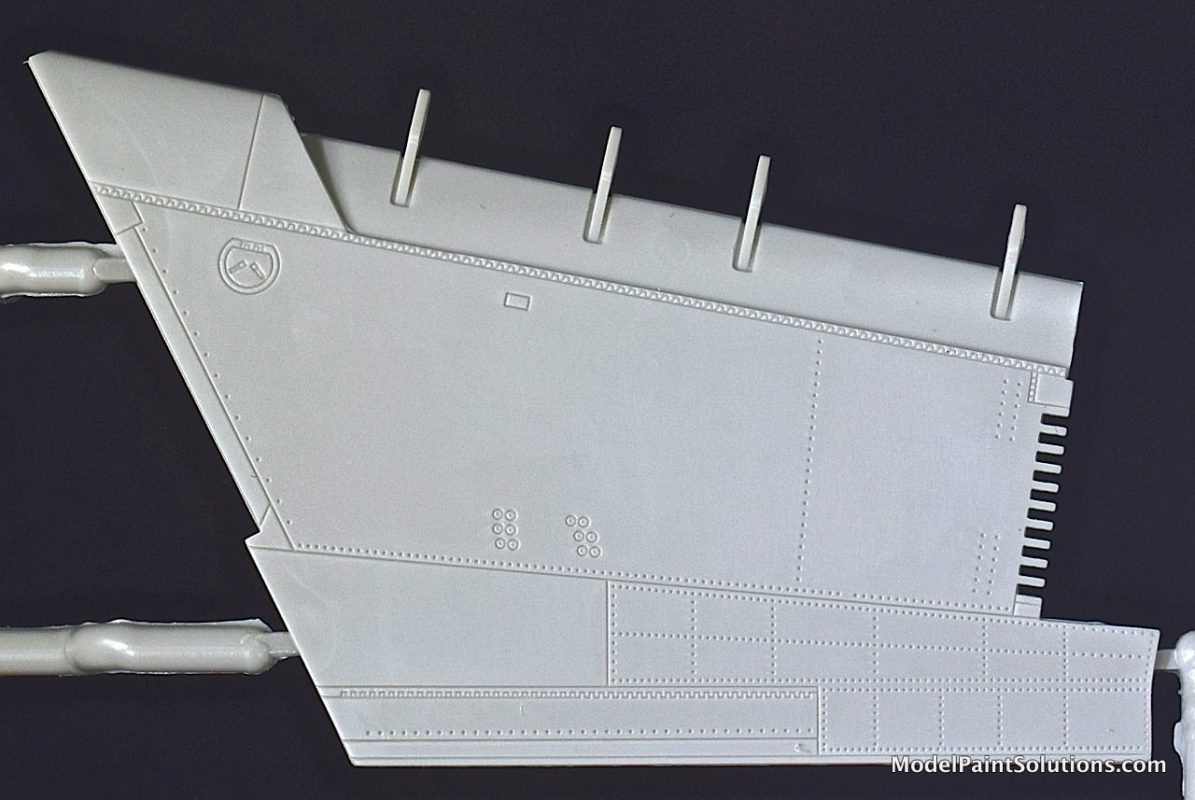 The wing center section contains the main wheel wells and has left and right, inboard, upper wing panels. The inboard flaps and inboard leading edge slats are all separate parts. Similarly, the foldable outer wing panels (comprised of upper and lower halves) have separate ailerons and leading edge slats. The builder has the option of building the wings folded or extended. Either way, with this much detail in the offing, the final result should look very convincing. 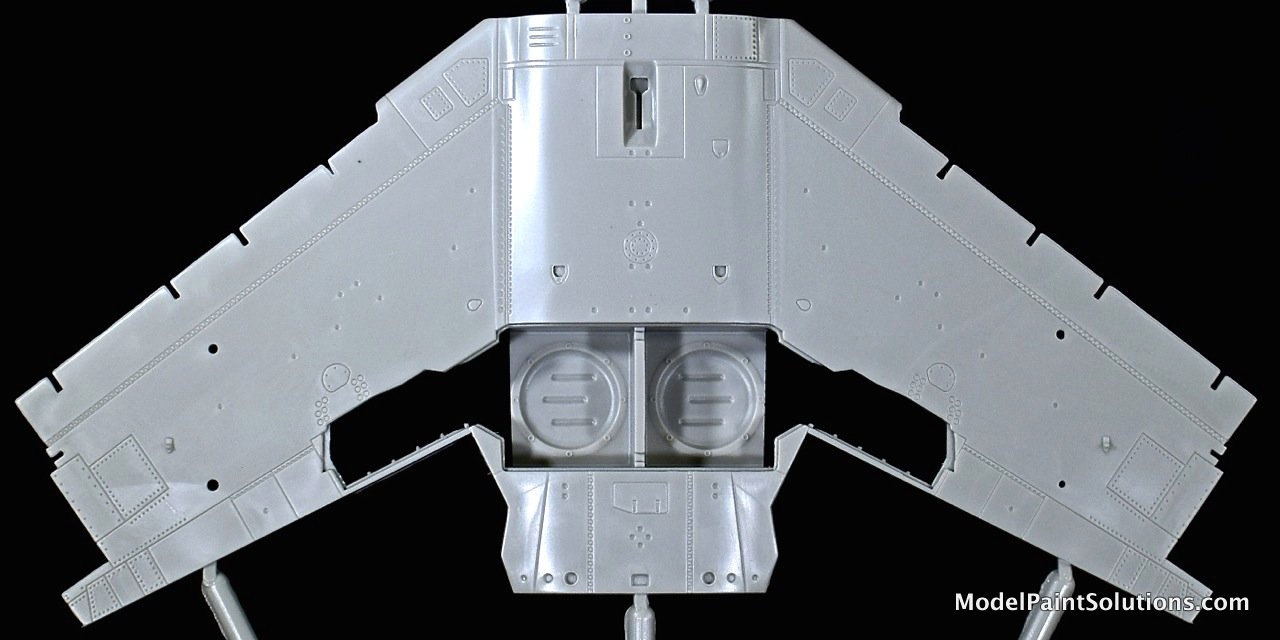 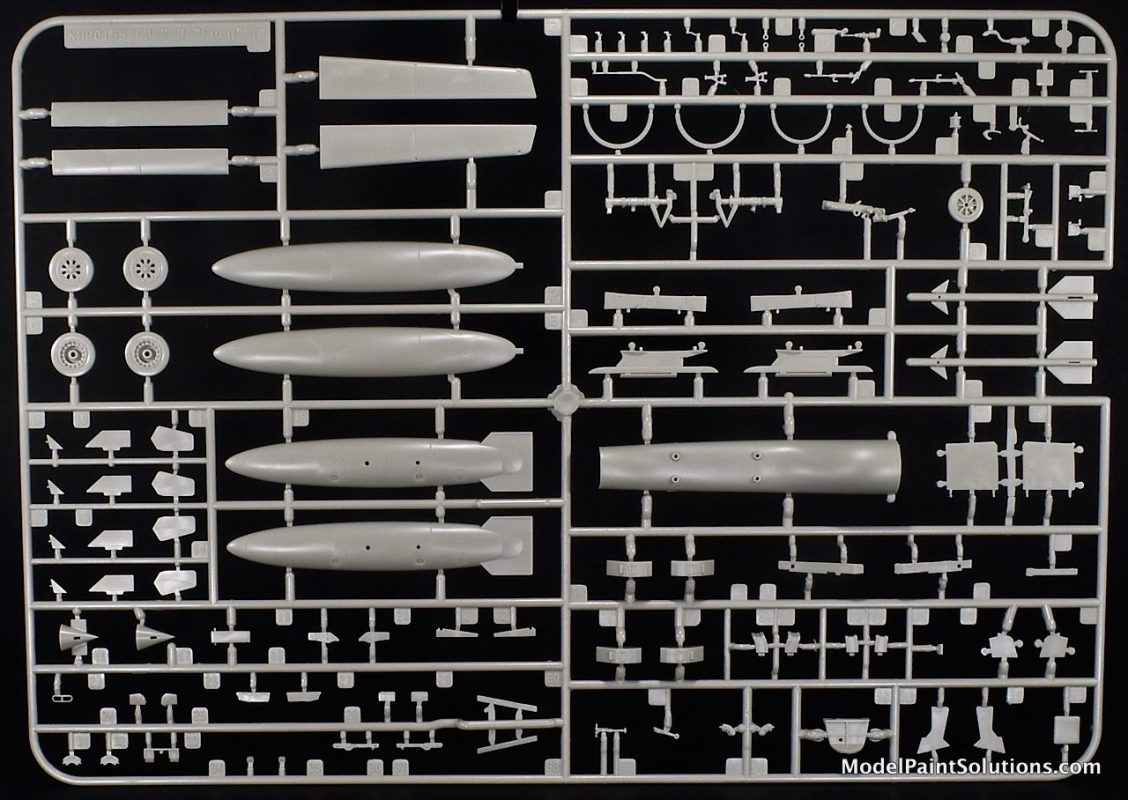 Next, the forward and aft fuselage sections are combined and offered up to the wing center section. With the addition of the halved vertical stabilizer/rudder assembly and single-piece horizontal stabilizers the majority of the airframe is complete (Note: see comment in Conclusion regarding fuselage assembly). 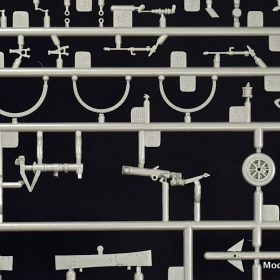 The nicely molded main wheels/tires are assembled from halves whereas the nose wheel is a single piece. The wheel wells, gear legs, and gear doors are all crisply molded with sufficient detail. Unfortunately, none of the tires are molded with a flattened portion to replicate “weight” so some time spent with a file (or your favourite heat source) will be time well spent.

The canopy parts are very clear and nicely molded with scale-appropriate framing. The canopy can be posed open; my usual option if possible. On my example a rather large and thick piece of flash was integral to the front wind screen part. This is fixable but will require extra work and care during clean up. 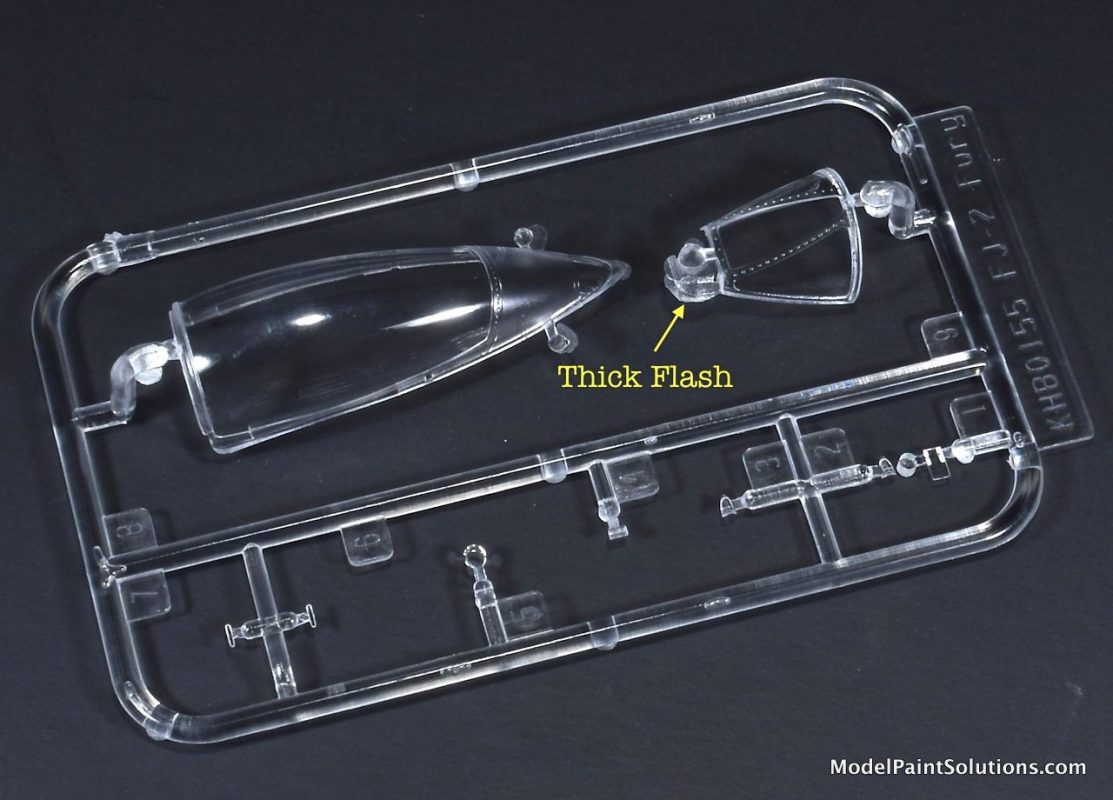 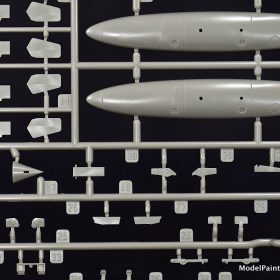 The rather colorful decals, by Kitty Hawk, are crisply printed with good color density and hue. 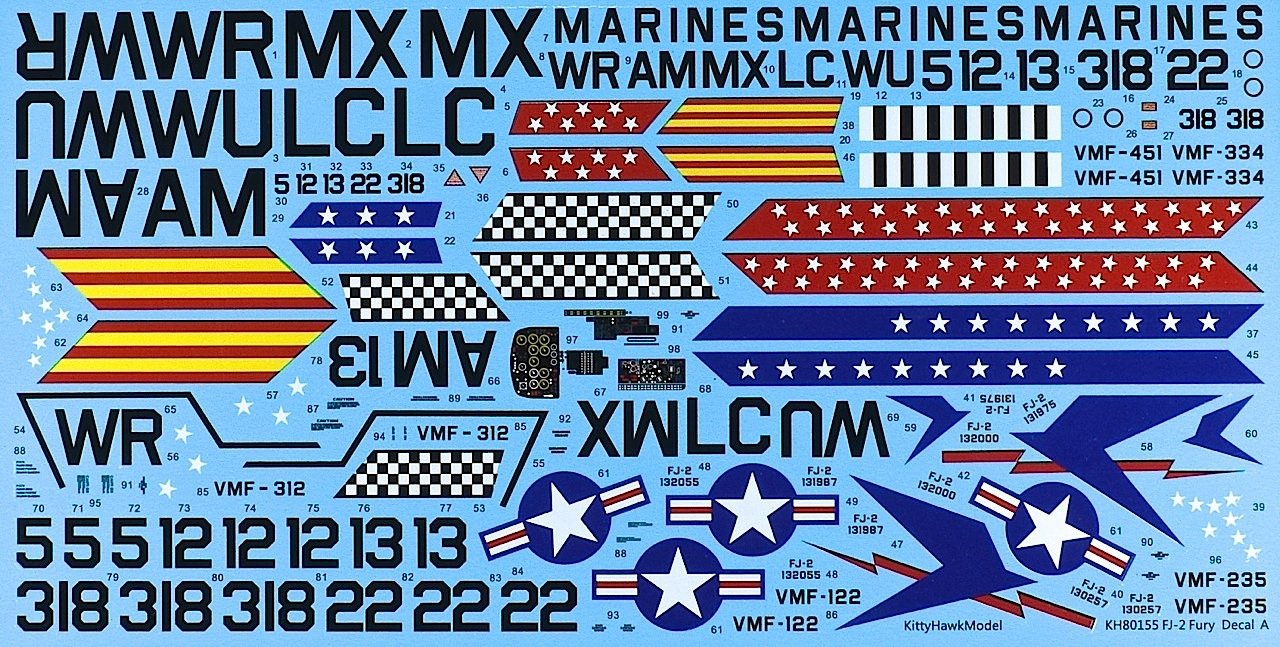 Markings for 5 colorful airframes are provided as follows: 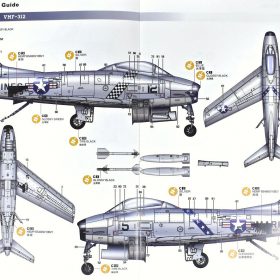 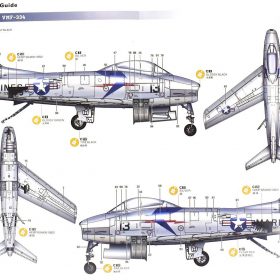 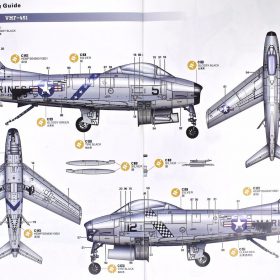 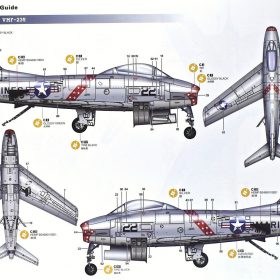 This is a nice kit. I see no major issues other than extra attention required aligning parts B27/28 as discussed and (possibly) some flash around the front wind screen part. Having seen a built example, this kit builds into a very nice looking model right out of the box. Recommended! 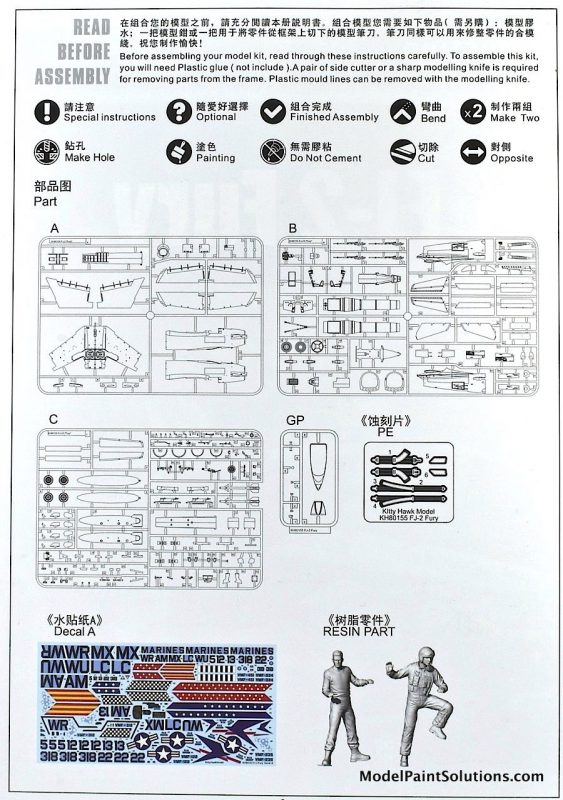 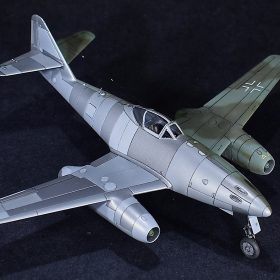 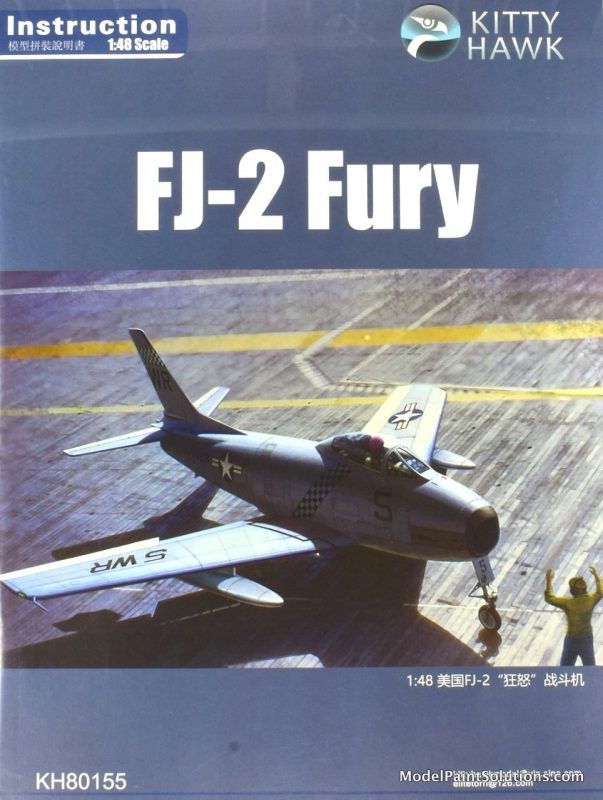 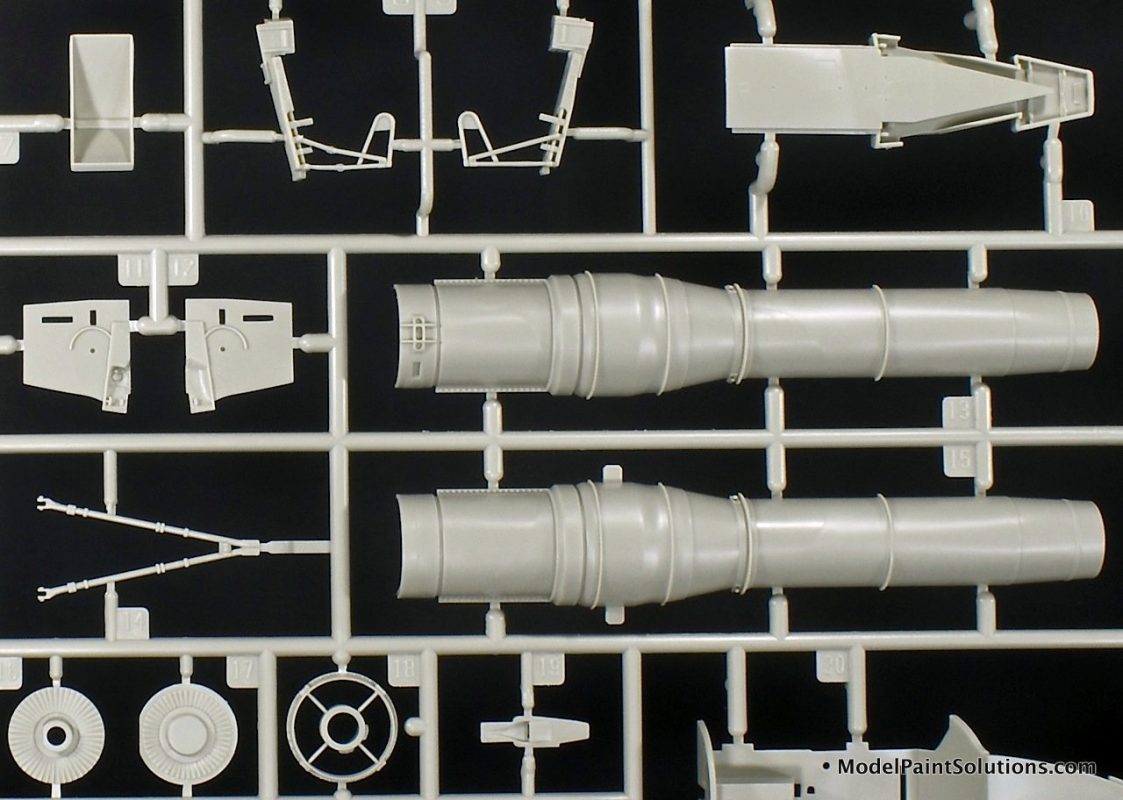 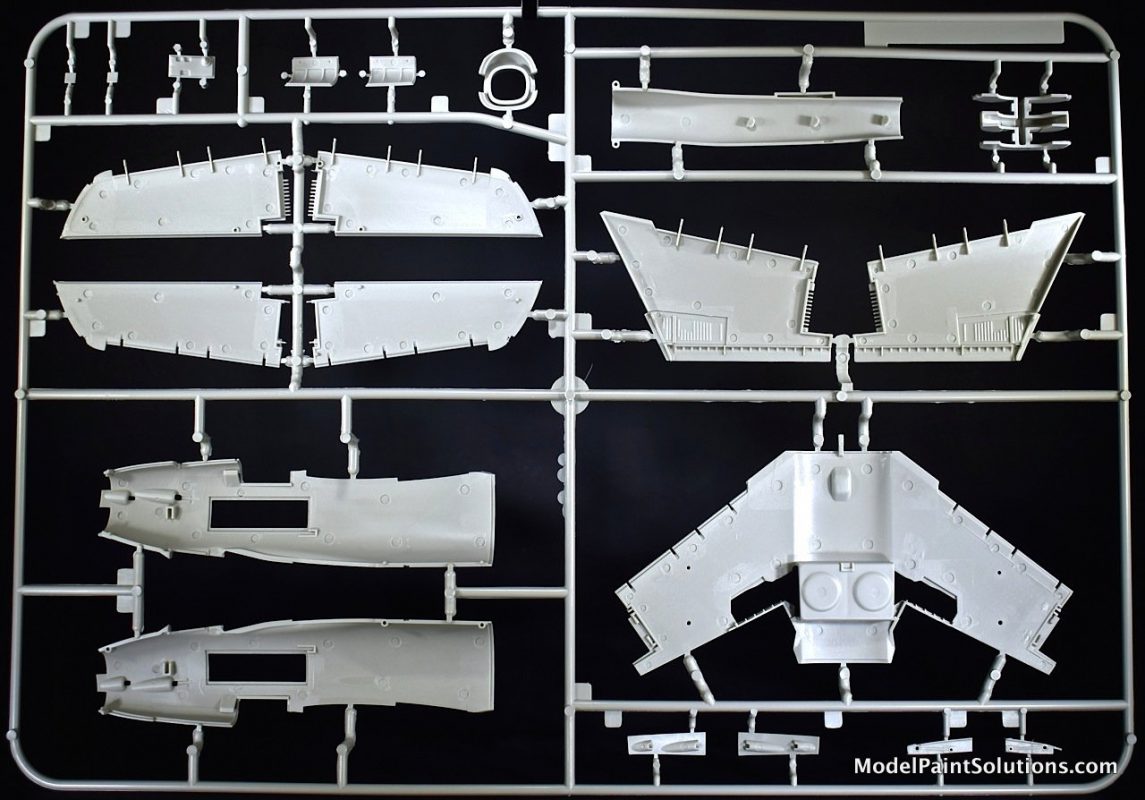