In 1916 Henry Folland, John Kenworthy and Major Frank Goodden of the Royal Aircraft Factory designed the SE.5. With a speed of 138 m.p.h it was one of the fastest aircraft of the war, while having stable and forgiving flying characteristics. According to aviation author Robert Jackson, the S.E.5 can be described as the ‘Spitfire of World War One'”.

The SE.5 could outperform its main rival, the Sopwith Camel however problems with its Hispano-Suiza engine, particularly the geared H-S 8B-powered early versions, meant there was a chronic shortage of SE.5s until early 1918. In response to the urgent need for a viable power plant, the Wolsey Company redesigned the Hispano-Suiza engine with a direct-drive unit and a different compression ratio calling it the Viper.

Fitted with the more reliable Viper engine the SE.5a together with Camel were instrumental in regaining allied air superiority in mid-1917 and maintaining it for the rest of the war. Many of the RAF’s most renowned pilots flew the SE.5 including Mannock, Bishop, McCudden, Beauchamp-Proctor, McElroy, and Maxwell. At the time of the Armistice ~2,700 SE.5s had been produced. The type remained in RAF service after the war but was phased-out by the early 1920’s.

I’ve always had a fondness for the SE.5. It is, literally, the first airplane I can remember learning about. As a child I was fascinated by my Fathers stories about the gas-powered “stick ‘n tissue” control-line SE.5 he built as a young man while serving in the US Navy. From that seed grew a life-long love for all things with wings and an interest in anything pertaining to the SE.5. That being the case, I was quite jazzed about the new Eduard SE.5 that was strategically positioned on the front counter at my local hobby shop, Skyway. The evil proprietor of this establishment knows exactly how to ambush innocent wingoholics like myself with this shameless ploy and it usually works. It did this time. The kit (# 82131) and some great Eduard detail sets just had to come home with me. More on those detail sets later. 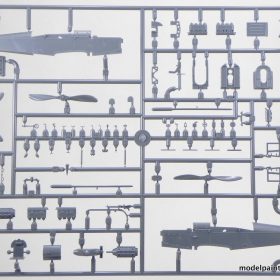 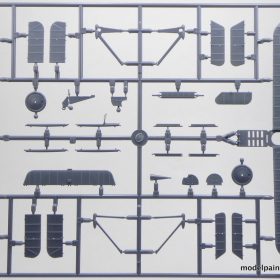 Having just released the slightly disappointing 1/48 Siemens-Schuckert SSW D.III that relied, in part, on another company for mold development, Eduard opted to keep all the work on the SE.5 in house and it shows. The kit parts are beautifully cast and with a nice color PE fret, masks, and a colorful assortment of decaling options this kit is a great deal for all SE.5 fans out there. Let’s take a look.

What’s in the Box:

The gray injected parts come on sprues A and B with 32 and 77 parts respectively. Sixteen of the parts on sprue B are not used in this boxing indicating that additional versions of the SE.5 are in the works including a 4-bladed version. This is good news. The eleven clear parts arranged on a circular sprue are beautifully molded and crystal clear. The color photo-etch fret features a nicely rendered instrument panel with individual instruments, seat belts, and assorted airframe details. Masks are provided for the windscreen, the wing inspection panels, and wheels/tires. 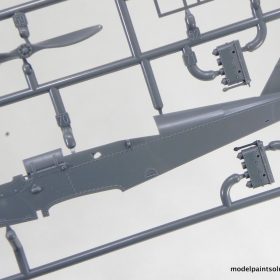 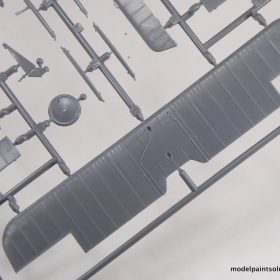 Construction begins with the cockpit, which is one of the nicest I’ve seen in this scale. Once assembled it will look quite impressive when seen through the open cockpit. The single piece lower wing serves to hold the completed cockpit while the fuselage halves are joined on top completing the assembly. Once the 9-piece engine is installed and the fuselage upper decking and nose cowl are affixed, the airframe is completed by the addition of a single-piece upper wing. All the control surfaces on the upper and lower wings as well as the elevators, and rudder are supplied as separate pieces. The cabane, interplane, and landing gear struts are beautifully cast while the pitot tube is supplied as a photo-etch part. To assist in rigging, the instructions provide nice schematics showing the placement of all the required cables in blue as seen from both above and below: very helpful. 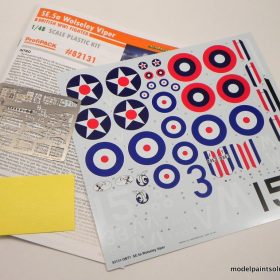 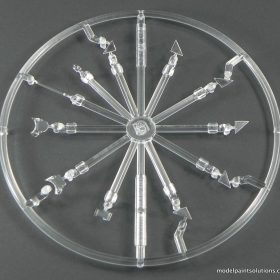 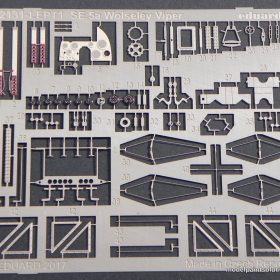 The kit provides markings for five aircraft as follows:

Aircraft had upper and side surfaces painted olive with a clear coat over the bear canvas undersurfaces.

Aircraft had British Khaki (PC10) on the upper surfaces of the lower and upper wings with canvas colored undersurfaces on both. Fuselage was red.

This is nice kit. The molding is top notch and the engineering is simple and well thought–out. This should be a very enjoyable build for a WWI aircraft model. My only regret is having too many kits in the Q to start working on it right now! Stay tuned for a review of the three beautiful detail sets Eduard has released to augment what is already a really a remarkable kit right out of the box. Highly recommended! 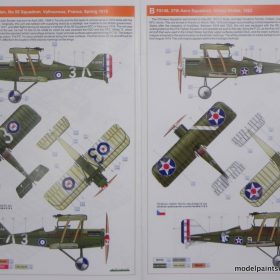 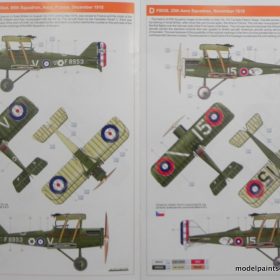 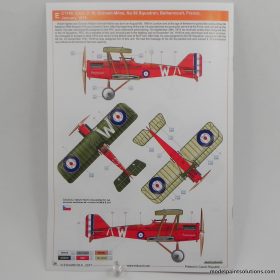