Once again the proprietor of Skyway Models strategically placed a kit that he knew I just had to have right there in his shop where I’d have no choice but to run right smack-dab into it. Ooooh…….a new RF-84F: you know the rest.

Sword has a reputation for producing very nice models of lesser-known aircraft. My compliments to the crew at Sword for kitting a new-mold F-84F that looks as though it will build into a beautiful model. That said this a limited-run kit and will require patience to get the most of what’s in the box.

The Republic F-84F Thunderstreak was an American-built swept-wing turbojet fighter-bomber. While sharing an evolutionary development with the straight-wing F-84 Thunderjet, the F-84F was a new design. The RF-84F Thunderflash was a photoreconnaissance version. 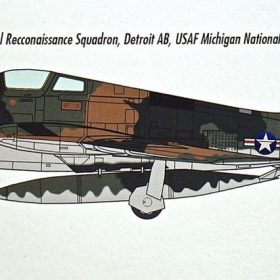 In 1949, a swept wing version of the F-84 was created with the hope of bringing performance to the level of the F-86. The last production F-84E was fitted with a swept tail, a new wing with 38.5 degrees of leading edge sweep and 3.5 degrees of anhedral, and a J35-A-25 engine producing 5,300 pound-force (23.58 kN) of thrust. The aircraft was designated XF-96A. It flew on 3 June 1950 with Otto P. Haas at the controls. Although the airplane was capable of 602 knots (693 mph, 1,115 km/h), the performance gain over the F-84E was considered minor. Nonetheless, it was ordered into production in July 1950 as the F-84F Thunderstreak. The F-84 designation was retained because the fighter was expected to be a low-cost improvement of the straight-wing Thunderjet with over 55 percent commonality in tooling.

In the meantime, the USAF, hoping for improved high-altitude performance from a more powerful engine, arranged for the British Armstrong Siddeley Sapphire turbojet engine to be built in the United States as the Wright J65. To accommodate the larger engine, YF-84Fs with a British-built Sapphire as well as production F-84Fs with the J65 had a vertically stretched fuselage, with the air intake attaining an oval cross-section. Production delays with the F-84F forced the USAF to order a number of straight-wing F-84Gs as an interim measure. 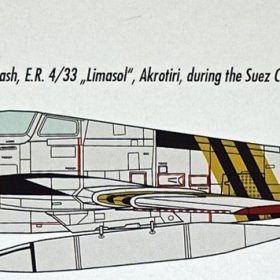 Production quickly ran into problems. Although tooling commonality with the Thunderjet was supposed to be 55 percent, in reality only fifteen percent of tools could be reused. To make matters worse, the F-84F utilized press-forged wing spars and ribs. At the time, only three presses in the United States could manufacture these, and priority was given to the Boeing B-47 Stratojet bomber over the F-84. The YJ65-W-1 engine was considered obsolete and the improved J65-W-3 did not become available until 1954.

When the first production F-84F finally flew on 22 November 1952, it differed from the service test aircraft in having a different canopy, which opened up and back instead of sliding to the rear, as well as airbrakes on the sides of the fuselage instead of the bottom of the aircraft. The aircraft was not considered ready for operational deployment due to control and stability problems. The first 275 aircraft, equipped with conventional stabilizer-elevator tailplanes, suffered from accelerated stall pitch-up and poor turning ability at combat speeds. Beginning with Block 25, the problem was addressed by the introduction of a hydraulically powered one-piece stabilator. A number of aircraft were also retrofitted with spoilers for improved high-speed control. As a result, the F-84F was not declared operational until 12 May 1954. 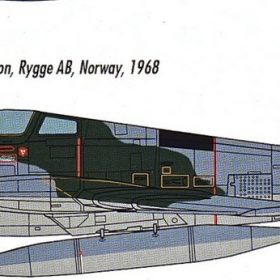 The second YF-84F prototype was completed with wing-root air intakes. These were not adopted for the fighter due to loss of thrust. However, this arrangement permitted placement of cameras in the nose and the design was adopted for the RF-84F Thunderflash reconnaissance version. The first YRF-84F was completed in February 1952. The aircraft retained an armament of four machine guns and could carry up to fifteen cameras. Innovations included computerized controls, which adjusted camera settings for light, speed, and altitude, a periscope to give the pilot better visualization of the target, and a voice recorder to let the pilot narrate his observations. Being largely identical to the F-84F, the Thunderflash suffered from the same production delays and engine problems, delaying operational service until March 1954. The aircraft was retired from active duty in 1957, only to be reactivated in 1961, and finally retired from the ANG in 1972. 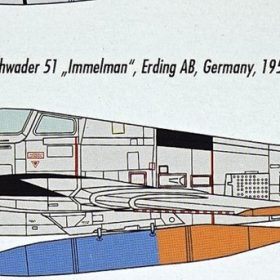 The Thunderstreak suffered from the same poor takeoff performance as the straight-wing Thunderjet despite having a more powerful engine. In reality, almost 700 pounds-force (3.11 kN) or ten percent of total thrust was lost because the J65 was installed at an angle and its exhaust had a prominent kink. On a hot day, 7,500 feet (2,285 m) of runway were required for takeoff roll. A typical takeoff speed was 160 knots (185 mph, 300 km/h). Like the Thunderjet, the Thunderstreak excelled at cruise and had predictable handling characteristics within its performance envelope. Like its predecessor, it suffered from accelerated stall pitch-ups with the potential to cause the separation of the wings from the airplane. In addition, spins in the F-84F were practically unrecoverable and ejection was the only recourse below 10,000 feet (3,000 m).

25 RF-84Fs were converted to be carried, and launched from the bomb bay of a GRB-36F bomber as part of the FICON project. The aircraft were later re-designated RF-84K.

Reconnaissance version of the F-84F, 715 built.

Two F-84Fs were converted into experimental aircraft. Each was fitted with an Allison XT40-A-1 turboprop engine of 5,850 shaft horsepower (4,365 kW) driving a supersonic propeller. Ground crews dubbed the XF-84H the Thunderscreech due to its extreme noise output.

Two F-84Fs were converted into YF-84J prototypes with enlarged nose intakes and a deepened fuselage for the General Electric J73 engine; the YF-84J reached Mach 1.09 in level flight on 7 April 1954. The project was cancelled due to the excessive cost of converting existent F-84Fs. 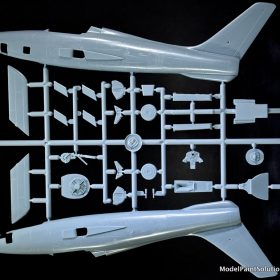 The immediate impression is one of simplicity: there aren’t that many parts. Upon close inspection the fuselage and wings feature fine, scale-appropriate surface details and inscribed lines. Some of the smaller inscribed details are rather shallow and could be lost under layers of primer and paint. I suspect this would be best addressed by refreshing (read deepen) some of the inscribed details with a scriber during assembly.

Assembly starts, as it usually does, with the cockpit, which is comprised of a well-detailed tub complete with consoles in relief and a nicely molded instrument panel. 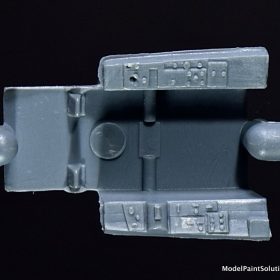 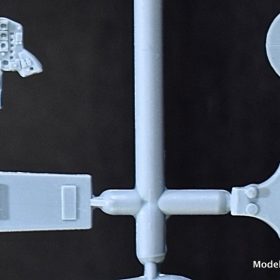 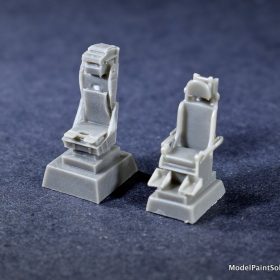 Two different types of ejection seats are provided in nicely detailed resin that will need little-to-no preparation prior to painting. No harness is provided. In addition, no information is provided as to which seat would be appropriate for the schemes provided on the decal sheet so check your references.

The three-piece nose wheel bay along with the cockpit and tail pipe assemblies are then trapped between the fuselage halves. No alignment tabs are provided so the builder will have to be mindful of aligning the inscribed panel lines during assembly. The addition of the one-piece horizontal stabilators completes the fuselage assembly. 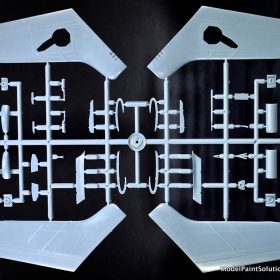 The wings, comprised of upper and lower halves, feature nicely done surface details and inscribed panel lines. As with the fuselage, some of the inscribed lines seem a bit shallow and may require a little “refreshing” with a quick swipe of the scriber. 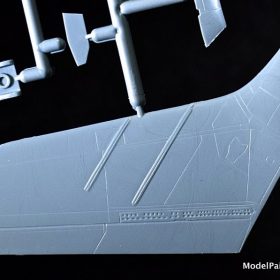 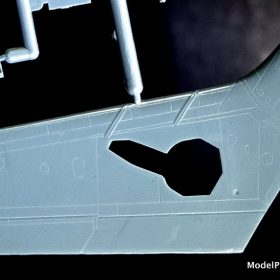 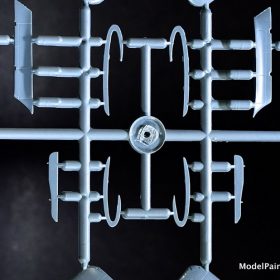 The wing fences are nicely molded but could benefit from a little thinning prior to attachment.The wings attach as a butt join that is guided in place by small raised sections on the sides of the fuselage. Some time here assuring a clean wings-to-fuselage join would be time well spent.

The clear parts are well molded and parts are provided to pose the canopy open or closed: very nice. The clear parts in my example were somewhat cloudy but this was easily addressed by a little buffing with a tissue. 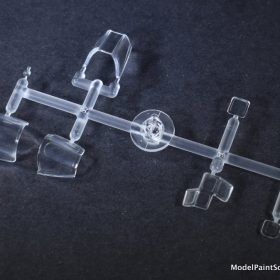 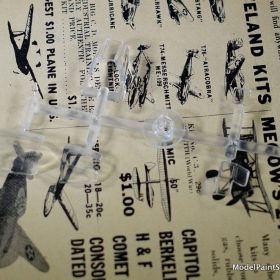 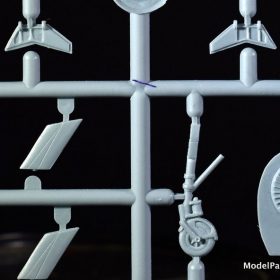 The landing gear parts are nicely molded and largely free of flash. The nose wheel and leg are provided as one part so some careful painting will be required for a convincing result. The hubs/wheels are well molded but the details here are a bit soft. A few minutes with a scriber will fix this.

Shoot 1 mm Wide Lines and Primers–All With One Brush: The Infinity 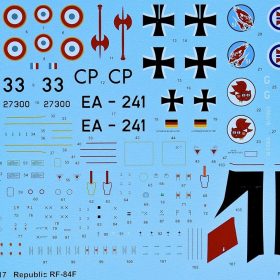 The colorful decal sheet, printed by Techmod, provides markings for 4 airframes. The decals have sharp, crisp details and perfect registration. The decal sheet is one of the notable features of the kit both in quality and the diverse options it provides as follows: 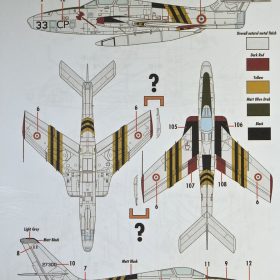 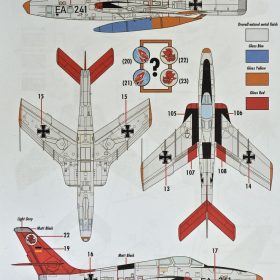 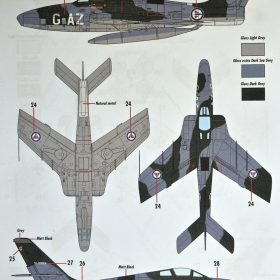 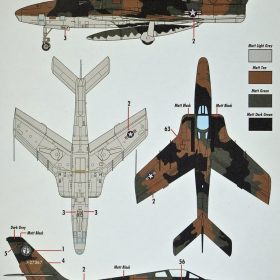 I like this kit. It has simple, straightforward engineering, a low parts count, and a beautiful decal sheet. Moreover, I don’t see any issues laying in wait for the unsuspecting modeler. That said I’ve built my fair share of limited run kits, including a few from Sword, and the best approach is always test-fit, modify-adjust, and test-fit again. That approach and some patience will allow you to get the most out of what is a very nice model. Recommended!

Now, there was something around here that needed painting……..