While attending the recent IPMS Oregon Modelers Society Modeling Show, I was fortunate to peruse the vendor’s table from a local shop, J&S Crafts and Hobbies. There, mixed in with a very nice selection of mostly armor kits (at amazing prices!) was this Takom 1/35 scale VW T3 Double-Cab Transporter Truck: I was smitten. In 1/35, the model is a nice size and the thought of airbrushing the tri-color Bundeswehr scheme was too much.

This is a very nice kit. A noticeable omission on the box art, scheme diagrams, and instructions however is the word “Volkswagen.” I suspect this is in response to a licensing issue. Not surprisingly, the characteristic “VW” logo is missing from the model as well. In its place is a circular logo that is strikingly similar to a VW logo; so similar that the addition of a few small “sticks” (provided in the kit) will replicate the logo perfectly. Now that’s thinking 🙂 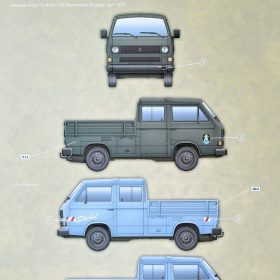 The Volkswagen Type 2 (T3) was the third generation of the Volkswagen Transporter and was larger, heavier, and more brick-like in its styling than its predecessor the T2. The T3 was marketed under multiple nameplates worldwide – including Transporter, Caravelle in Europe, Microbus in South Africa, and Vanagon in North and South America

The T3 was manufactured in Germany from 1979 until 1990. Production of the 2WD version (mostly for official use, like postal service or German Army) continued until 1992 at Puch in Graz, Austria, where all 4WDs had been built. South African production of the T3 continued, for that market only, until 2002. The T3 was the final generation of rear-engined Volkswagens.

With the internal combustion engine and transaxle mounted very low in the back, the T3 had much larger disc brakes in the front, and drums in the rear. Axle weight is very nearly equal upon both the front and back ends of the vehicle. Unlike the T2 before it, the T3 was available with amenities such as power steering, air conditioning, power door locks, electrically controlled and heated mirrors, lighted vanity mirrors, and a light above the glove box (most of which were essentially standard equipment in later models). 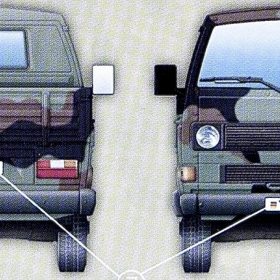 The automatic was a standard hydraulic three-speed unit, the same 090/010 unit as used in Audis of the era. These featured a cast aluminum alloy case for the transmission section, and a cast iron case for the final drive section. 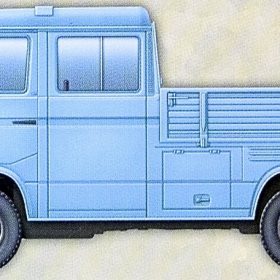 The oil filler tube for the engine is located behind the flip-down license plate door, as is the oil dipstick and the power steering fluid reservoir (when fitted). Most vans had a twist-on/off gas cap right on the outside just under and behind the passenger side door. A locking cap was optional. The spare tire lies in a tray under the very front of the van.

The Bundeswehr used Volkswagen T3 Transporters, as did multiple militaries in Europe. The type was also used and on some European-based U.S. Air Force and U.S. Army military bases for support (non-tactical). 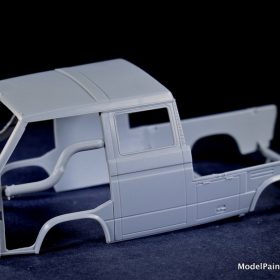 The model comes in a sturdy, lidded box adorned with very nice picture of a Bundeswehr T3 with a Leopard-2 in the background. The kit is composed of three gray styrene sprues (individually bagged), a separate main cab, one large sprue of clear parts, and one small decal sheet. 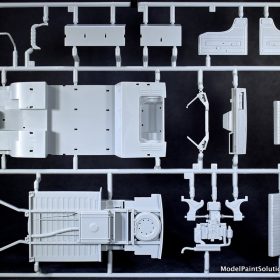 It is immediately apparent that the molding is very well done with practically no flash to be seen anywhere. The inscribing is sufficiently deep, crisp, and scale appropriate. The surface details are nicely rendered and will really pop under paint and weathering.

The individual rubber tires have a nicely detailed tread and no mold seems to contend with. Likewise the detailed wheel hubs have well-molded lightning holes. 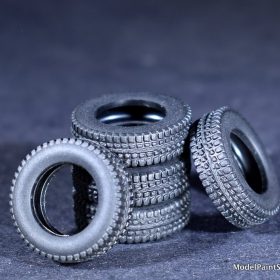 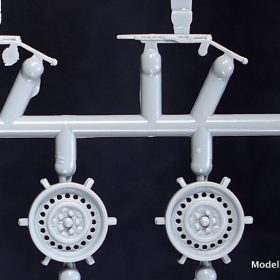 Assembly starts with the four wheels/hubs followed by a very nicely detailed engine/transaxle unit. The front wheels can be built straight or turned. 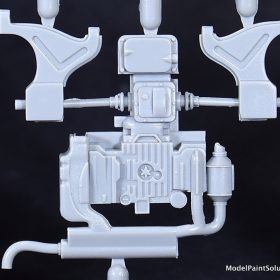 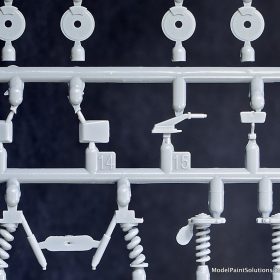 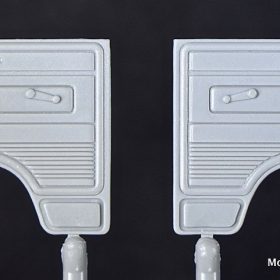 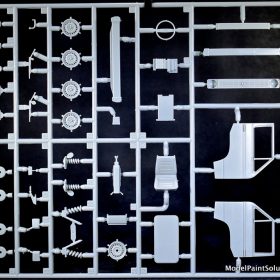 The interior door panels are nicely detailed and will look very convincing under paint. Good thing as both front doors can be posed open to show off your work. 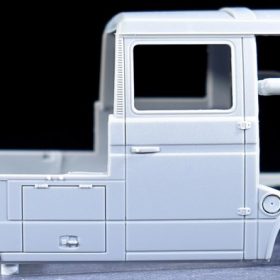 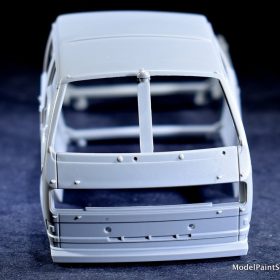 The main cab piece is well molded with the same scale-appropriate inscribing and surface detailing seen on all the parts. Of note, the cab piece is rather large and didn’t quite fit the width of the box in my example. This caused the main cab to be warped: a small issue that could cause a big problem during assembly. Luckily this is easily remedied with a little warm water and re-shaping by hand. 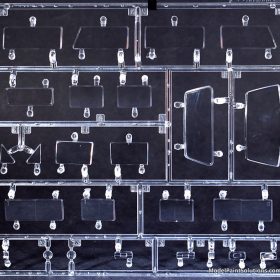 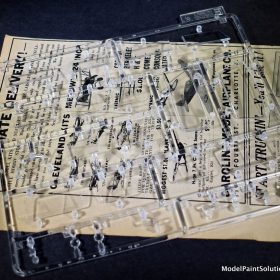 Assembly of the cab entails the insertion multiple clear parts including the windshield and windows that are very clear if not on the thick side. The clear sprue is common to multiple versions of the T3 kitted by Takom so there are clear parts not used with this kit. 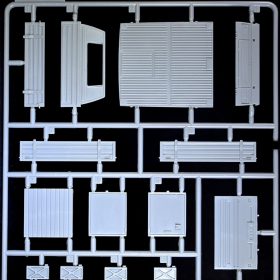 Once the main body is assembled, the corrugated bed and nicely detailed side panels are added followed by the bumpers and front grill/headlight assembly. At this juncture, you’ll have a nicely detailed 1/35 T3 that’s going to need some paint: my favorite part. 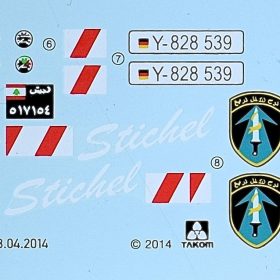 The decals, printed by Takom, are crisp with good color density. Markings are provided for three Transporter trucks as follows: 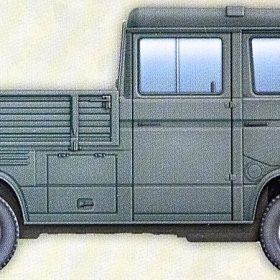 Transporter is dark green with a gold, green, and black emblem on each side.

Transporter is medium blue with a stylized “Stichel” logo on each side and small red/white panels. 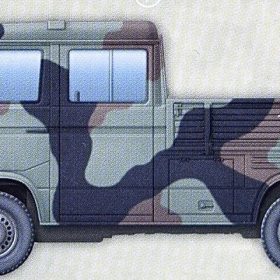 This is a really neat kit and one not often seen. The moldings are crisp and the inscribing and surface details are very well done. If the military schemes don’t interest you, the possible civilian schemes are limited only by your imagination. Highly Recommended! 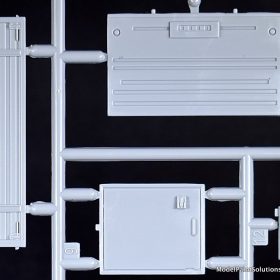 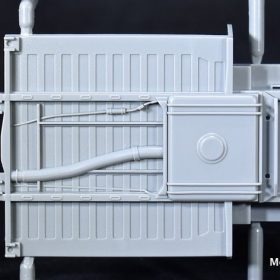 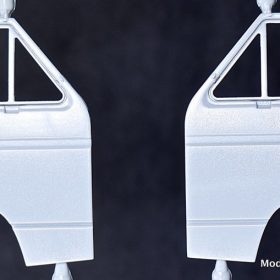 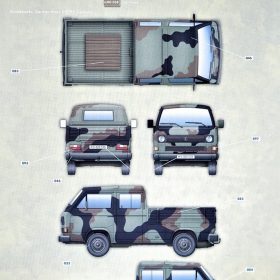 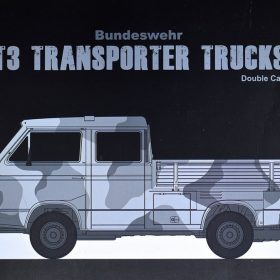 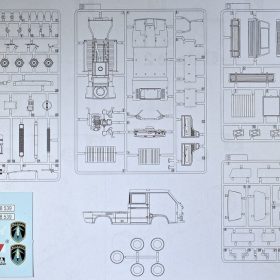