The North American B-45 Tornado was the first United States Air Force jet bomber and the first multi-jet engined aircraft to be refueled in midair. The B-45 was an important part of the U.S. nuclear deterrence program for several years in the early 1950s, but was superseded by the Boeing B-47 Stratojet. B-45s and RB-45s served in the USAF’s Strategic Air Command from 1950 until retirement in 1959.

Development of the B-45 began in 1944, when the U.S. War Department called for a new family of jet bombers similar to the new German jet bombers like the Arado Ar-234. A proposal from North American Aviation (NA-130) won, and on September 8, 1944, the company began production of three prototypes. The XB-45 broke ground for the first time on March 17, 1947.

Rising post-war tensions with the Soviet Union induced the U.S. Army Air Forces (USAAF) to assign higher priorities to jet bomber development. To that end, the US initiated a contract with North American Aircraft on January 2, 1947 for immediate production of B-45As. It had been planned to equip five light bomb groups and three light reconnaissance groups with B-45As, but the promising results of the Boeing B-47’s development and flight-testing made future production the B-45 increasingly uncertain. Soon afterwards, President Truman’s budget restraints decreased Air Force expenditures and planned B-45 production was greatly reduced. 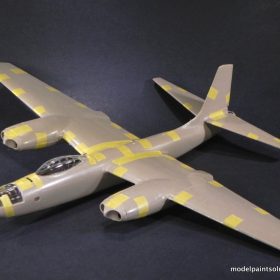 Although plagued by engine problems and numerous minor flaws, the B-45 regained importance as a bomber and a reconnaissance aircraft when the United States entered the Korean War in 1950. The re-deployment of U.S. forces from Europe to Korean revealed vulnerabilities of North Atlantic Treaty Organization forces to Soviet attack. In this light, the Air Force made an important decision about the future of the B-45: it was modified to carry nuclear weapons.

Operation Fandango (sometimes called Operation Backbreaker) was a modification program that entailed changes to the B-45 permitting it to deliver nuclear weapons. The 40 B-45s allocated to the program were also equipped with a new defensive system and additional fuel tankage.

Despite issues with the modifications plus ongoing problems with the early jet engines, all 40 of the nuclear-capable B-45s were deployed to the United Kingdom by mid-June.

At about the same time, the reconnaissance version of the B-45, the RB-45, fitted with 12 cameras in four different positions along the fuselage, was deployed to Japan as part of the 323rd Strategic Reconnaissance Squadron. RB-45’s of the 323rd flew alongside WWII-era RB-29s of the 91st Strategic Reconnaissance Squadron and provided valuable intelligence throughout the remainder of the Korean War. RB-45 missions were limited to night operations in early 1952 in response to the downing of a Tornado by a Mig-15.

By the end of the 1950s all USAF B-45s were retired from active service however, a few continued to act as test aircraft into the early 1970s. The only other nation to use the RB-45C was the United Kingdom and the limited use of the Tornado by the RAF is an interesting and little-known story.

The USAF was prohibited by the President of the United States from overflying the Soviet Union unless under a state of war. US allies close to the European theatre of war however, could.

Winston Churchill and the conservative administration at Downing Street sought a more co-operative atmosphere to joint intelligence initiatives with the US. To that end, Britain leased four RB-45 aircraft from the USAF 91st Strategic Reconnaissance Wing to form an RAF Special Duties Flight commanded by Squadron Leader John Crampton and operated by ad hoc crews drawn from RAF squadrons No. 35 and 115. The program was named Operation Ju-Jitsu and was initiated in 1951.

Repainted with RAF markings, the four aircraft were attached to a USAF squadron based in RAF Sculthorpe, Norfolk in eastern England and tasked with flying deep-level reconnaissance missions over the Soviet Union to gather electronic and photographic intelligence during the period of 1952–54.

On April 17, 1952 three aircraft assigned to head for Kiev from Germany were flying at 36,000 feet when Crampton’s aircraft was tracked by ground radar and came under antiaircraft fire. Applying full power, he immediately turned for Germany evading Soviet night fighters that had been dispatched to hunt his aircraft.

Subsequent flights over the Soviet Union were carried out under Project Robin using English Electric Canberra’s operating at the higher altitudes of ~54,000 ft (16,000 m).

It was not until 1994 under the “fifty-year rule” of the Public Records Act of 1958 that the existence of these spy missions became public knowledge. (Edited from Wikipedia)

First impressions are very positive upon opening the rather large box (kit# 72102). The second impression is size: the Tornado is a big airplane. The injected parts are provided on three tan-colored sprues. No locator pins are provided on any of the major components. The plastic seems a tad on the brittle side so care should be taken when removing parts. Luckily, the sprue gates are small facilitating the use of a fine saw for removal. There is flash on most parts that will require clean up prior to assembly. 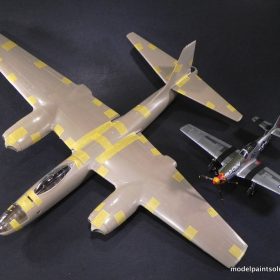 The engraving overall is restrained and scale appropriate. Some panel lines are a bit shallow suggesting that re-scribing may be required. The fit of the major components is good but will require sanding, filing, and test fitting prior to committing with glue. 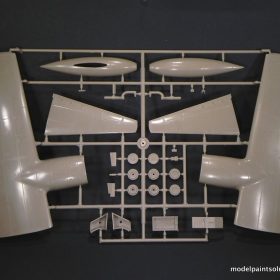 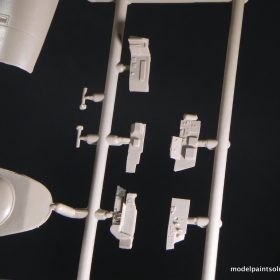 Assembly starts with the pilot’s office. The detail here is nice and will look quite convincing when complete. Both pilot and copilot stations have nicely detailed side panels, seats, and PE instrument panels and yokes. The instructions include drawings of both positions to facilitate assembly and detailing: nice. 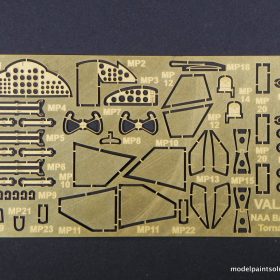 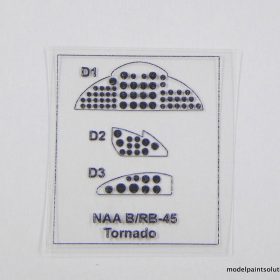 The remainder of the assembly is a bit unconventional. A wing spar is trapped between the fuselage halves and serves as the main attachment point for the wings. The wings slip onto this spar and abut against a beveled shoulder at the wing-to-fuselage join. At first glance this seemed a bit tricky but test fitting revealed a pretty nice fit with little gap. 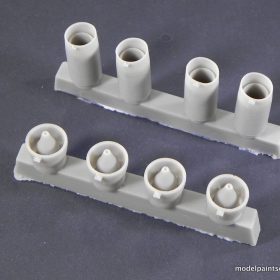 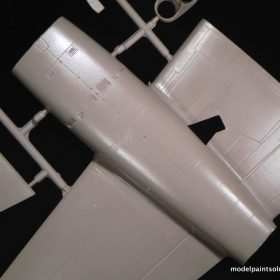 The rather large horizontal stabilizers are attached by just a butt join so care will have to be taken to assure proper fit, alignment, and dihedral. The wing halves will require some adjusting to achieve a nice fit. Unfortunately, the wing trailing edges are thick and will require thinning to be more to scale. The nacelles have nice engraved details however the nacelle intakes will require work for a smooth fit. Very nice resin engine intakes and exhausts are provided to dress this area up. 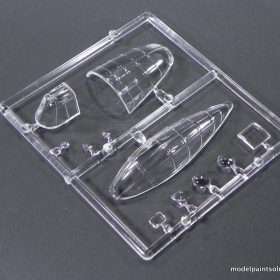 The three clear parts (canopy, nose glazing, and tail gunner position) are nicely molded with restrained, scale-appropriate framing. A photo-etch “windshield wiper” is supplied for the front windscreen, which should look really nice. In addition, the photo-etch fret provides complete harnesses for all three seats and oleo scissors for all three landing gear legs. 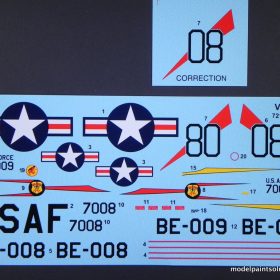 The decal sheet is printed by Valom. The decals have good registration the red has the appropriate hue. Markings for two airframes are provided: 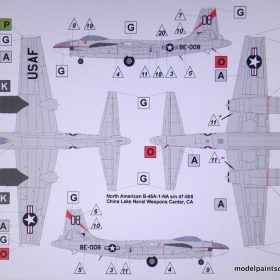 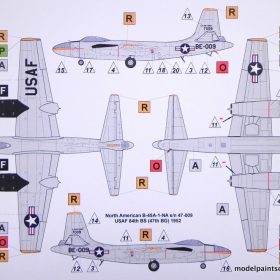 This aircraft from the China Lake Naval Weapons Center was over-all natural metal with a white/red nose, red flash on the vertical stabilizer, and white wing tips. A separate replacement stabilizer decal is provided for the incorrect one that’s included on the decal sheet. The replacement decal is of the same quality as the main sheet.

This aircraft from the 84th BS (47th BG), USAF circa 1952 was over-all natural metal with a red/yellow flash on the nose and yellow wing tips.

This is a nice kit that’s just begging to be built. Alas, so many kits, so little time. That said this build is going to require patience and entail some extra work with ye olde files and sand paper to ensure the major components fit correctly. Moreover, considering that this beastie wears a skin of un-painted natural metal, a fair amount of time will be spent prepping the plastic for a metalized finish. The result however will be impressive for both its size and rarity. Highly recommended! 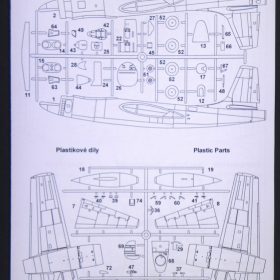 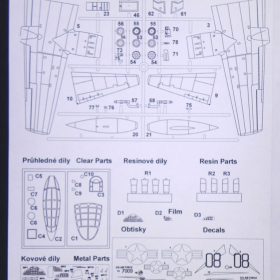 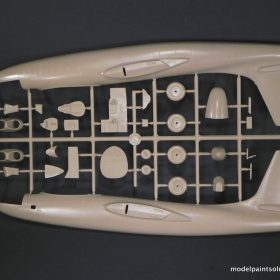 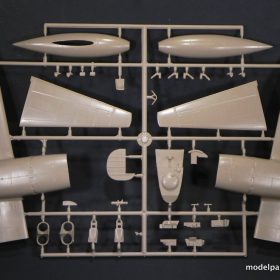