Just as I was leaving Skyway Model Shop after my weekly visit , I made the mistake of making one last scan of the “New Kits” wall and ZANG, there it was; a 1/35 Scale Indian Scout motorcycle. I was smitten. I’ve long had an affinity for old motorcycles and the interesting scale of 1/35 sealed the deal.

This is a really neat kit that will build into a very nice model. It will take a bit of patience as the parts count is relatively high and most of the pieces are rather small. The result however should look quite convincing and not something commonly seen at model shows. 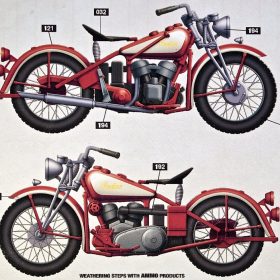 The Indian Scout motorcycle was built by the Indian Motorcycle Company from 1920 to 1949. It rivaled the Chief as Indian’s most important model. The 101 Scout, produced from 1928 to 1931, has been called the best motorcycle Indian ever made. A second line of Scouts, with heavier frames, was introduced in 1932 alongside the Standard Scout, which replaced the 101 Scout and shared its frame with the Chief and the Four. The small-displacement Scout and the Sport Scout, introduced in 1934, were continued until the end of civilian production in 1942. Military versions of both models were used by US and other Allied forces during World War II.

Apart from fifty examples of the 648, a special racing version of the Sport Scout, the Scout was not continued after World War II. In 1949 an all-new motorcycle, with an overhead valve straight-twin engine, was also named the Scout. This motorcycle was later enlarged and renamed the Warrior in 1950.

Between 2001 and 2003, the Indian Motorcycle Company of America, based in Gilroy, California, built a Scout model using proprietary engine and transmission parts.

Designed by Charles B. Franklin, the Scout was introduced in October 1919 as a 1920 model. The Scout had a sidevalve V-twin engine with its transmission bolted to the engine casing, allowing a geared primary drive making it the only American v-twin to use this maintenance-free system. The Scout engine initially displaced 606 cc (37 cu in), but the engine size was increased to 745 cc (45 cu in) in 1927 in response to the popularity of the Excelsior Super X. In early 1928, a front brake was added to the Scout. 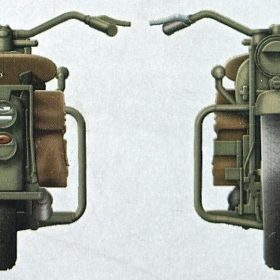 In mid 1928 the Scout Series 101 replaced the original Scout. Designed by Charles B. Franklin, who had designed the original Scout, the 101 Scout had a new frame with more fork rake, a longer wheelbase, and a lower seat height. The geometry of the 101 Scout wheelbase, steering head angle and rear sub-frame were all adopted from the new Indian 401 model which was under development at the same time. The standard Scout 101 was available with a 45 cu in (740 cc) engine, but it was also available with a 37 cu in (610 cc) engine from the original Scout, although this was rarely advertised. The 101 Scout was noted for it’s handling and was popular with racers, hill climbers, and trick riders.

The economic hardship of the Great Depression pushed Indian to the brink of bankruptcy leading to the company being purchased by the DuPont family. In 1931, it was decided to rationalize production by designing a new frame that, with some detail variations, would be used across their entire new 1932 model range that included the Scout, Chief, and the Four. Thus the 101 Scout was discontinued, as its unique chassis was as expensive to produce as the 74 cu in (1,210 cc) Chief, and therefore had a small profit margin.

Cost cutting led to Indian designing a new basic frame for 1932 that would form the basis for the Scout, Chief, and Four frames. The 1932 Standard Scout that was based on this new frame was heavier and bulkier than the 101 frame and was less successful as a result. The Standard Scout remained in production until 1937. 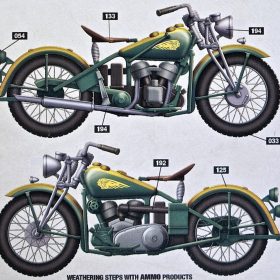 In 1933, to appease the sporting motorcyclists offended by the replacement of the 101 with the Standard Scout, Indian introduced the Motoplane. This had a Scout engine fitted into the frame of the discontinued Indian Prince single cylinder motorcycle. The Motoplane was also sold as the Pony Scout with the engine displacement reduced to 30.50 cu in (499.8 cc).

The power of the Scout engine was too much for the Prince-derived frame and the Motoplane was discontinued. The less powerful Pony Scout remained in production and was later renamed the Junior Scout. The Pony Scout and the Junior Scout were collectively known as the “Thirty-Fifty” after their engine displacement in cubic inches.

The negative reaction to the Standard Scout and the failure of the Motoplane led to the creation of the Sport Scout of 1934, with a light frame, girder forks, improved carburation, and alloy cylinder heads. The two-piece frame, with the front and rear halves bolted to each other to the top and to the engine at the bottom, was heavier than the Motoplane’s Prince-derived frame, but also stronger and stiffer. The Sport Scout was still 15 pounds heavier than the 101 Scout. A specially tuned Sport Scout won the first Daytona 200 in 1937. 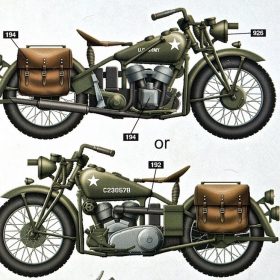 The most common Indian motorcycle made for military use in World War II was the model 741, a military version of the Thirty-Fifty. Model 741’s were primarily used by British and Commonwealth forces with Indian selling more than 30,000 of the model.

The 640-B, a military version of the Sport Scout, was tested by the US Army and used on bases within the United States, but was not shipped overseas. Approximately 2,500 were built.

When Indian restarted civilian production in 1946 they produced the Chief only; the Junior Scout, Sport Scout, and the Four were discontinued. Engineering work being done on a Model 647 Scout was abandoned in favor of developing a completely new line of lightweight single-cylinder and vertical-twin motorcycles.

The kit comes in a sturdy, cardboard box with a hinged lid adorned with an artistic rendering of a US Military Scout. Inside are 4 individually bagged sprues of light grey styrene (equating to 2 complete models), a bag with 2 PE frets, a bag with 2 clear sprues, a length of copper wire, and one small, well-printed decal sheet. 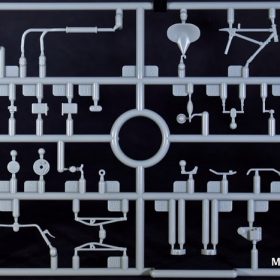 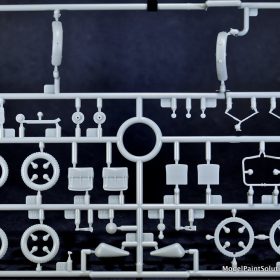 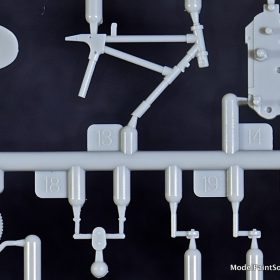 Upon close inspection the parts are crisply molded with very little flash. Readily apparent is the rather high parts count and how small the completed model will be. The level of detail is high throughout the kit. In particular, the PE fret is marvelously detailed (below).

Construction begins with assembling the wheels and tires. The spokes for each wheel are comprised of two pieces of very nicely etched PE. To confer the appropriate cone-like angle to the spoke pieces, a two-part plastic jig is provided that immobilizes the PE spokes while they are bent appropriately. Not only are the PE spokes very well done, the folks at Thunder Models must be commended for providing the modeler with a very handy jig as part of the kit: very nice. 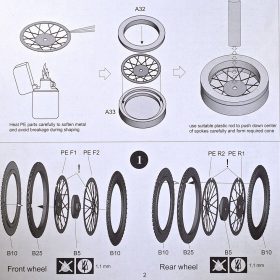 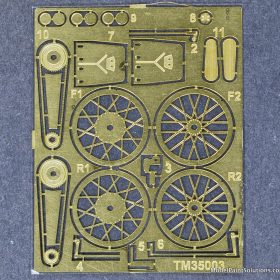 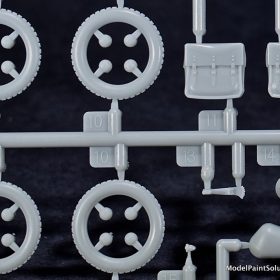 The tires are comprised of 3 discs each that, when assembled, will have a nice representation of tread.

The 500cc Indian V-twin is nicely detailed with scale-appropriate cylinder cooling fins that will look great after a dark wash. 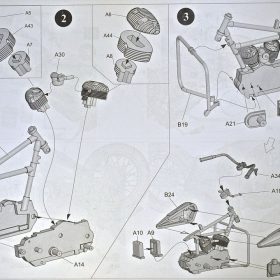 With the engine and basic frame assembled, the rest of the build is pretty straightforward. Of note is the nice use of well-detailed PE pieces for details such as the gear-chain assemblies and foot rests.

Assembly is completed with the addition of a nicely detailed leather seat and saddlebags, which should look awesome after painting and weathering. 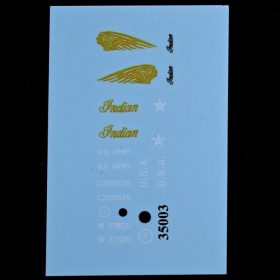 The small decal sheet is printed by Thunder Models. The decals have very little carrier film and the color and hue seem scale appropriate. Of note is the nicely printed “Indians Head” logo. Markings are provided for 3 Scouts as follows: 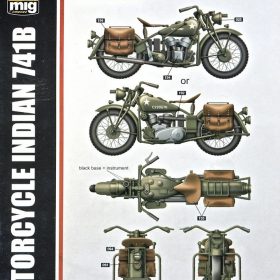 1) Millitary Scout 741B in overall olive-drab with white, 5-pointed stars on the gas tank. 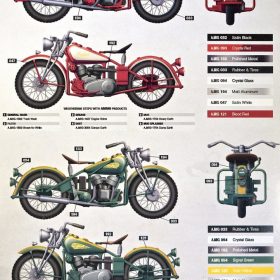 2) A civilian Scout in overall blood-red with satin-white trim and “Indian” in yellow cursive letters on the tank.

3) A civilian Scout in overall signal green with gold-yellow trim and the “Indian’s Head” logo on the tank.

This looks like a blast of a kit or should I say kits? The details are well done and the engineering in simple and straightforward. The PE wheel spokes in particular will make this kit stand out. Whether you choose the military scheme or either of the colorful civilian markings, the result will be a detailed model of a subject seldom seen in 1/35th scale. Highly Recommended! 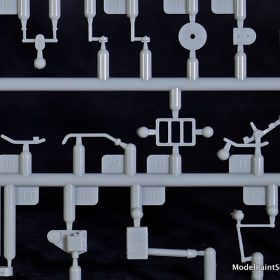 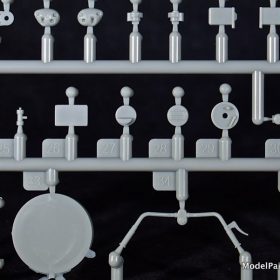 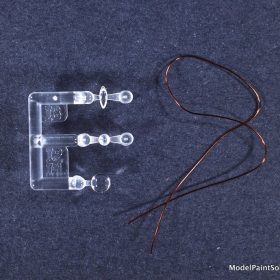 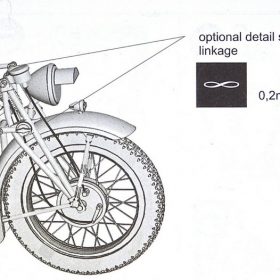 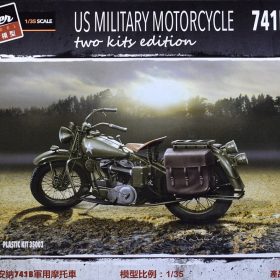